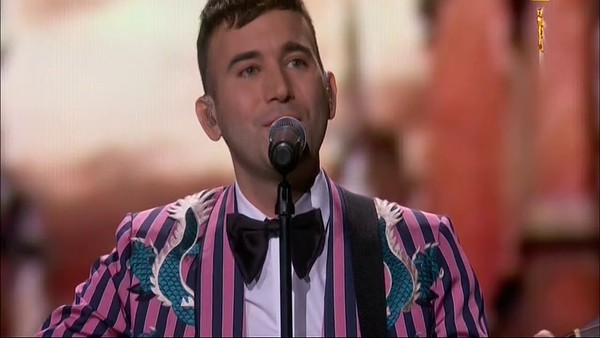 On Sunday night, Detroit-bred singer-songwriter Sufjan Stevens, performed his Oscar-nominated song, “Mystery of Love” from the Call Me By Your Name soundtrack during the award ceremony. Backed by a dream cast of a band, including former collaborator St. Vincent and Moses Sumney, Stevens imbued a serene aura of light on the audience with his whispery voice, finger-picking, and angelic harmonies.

Sufjan Stevens snags Oscar nod for Best Original Song
By Jerilyn Jordan
City Slang
While Stevens didn’t end up winning the Oscar, he could be in contention for best dressed for his candy-striped dragon getup. Thanks for making us proud, Sufjan.

Stevens will release a 10-inch record featuring three of his songs from the Call Me By Your Name soundtrack for Record Store Day on Saturday, April 21.

City Slang Sufjan Stevens Call Me By Your Name Oscars