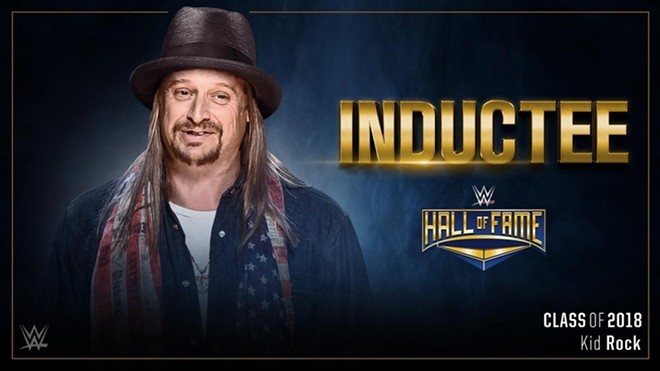 If you saw Kid Rock trending on social media last night, you probably thought he was appointed U.S. Secretary of State, or maybe that he died. Neither is true. As it turns out, you don't have to be a professional wrestler to be inducted into the WWE Hall of Fame — you just have to be Kid Rock.

It was announced last night that one-man-trash-circus, rap-rocker, and psych-out Senator would be inducted into the "celebrity wing" of the WWE Hall of Fame. Rock, who has performed at several WWE events over the years, will join fellow celebrities Snoop Dogg, Mike Tyson, Arnold Schwarzenegger, and Drew Carey in receiving the honor.


“Every time I go to a WWE event I always have a good time; there is nothing like it and no better fans in the world," Kid Rock told Billboard, referring to the induction as a "real honor."

Kid Rock in the WWE Hall of Fame?

Some WWE fans, however, are upset Rock will receive the honor before Chyna, a 20-year pro wrestling veteran, among other WWE mainstays.

Agreed. “Bawitdaba” was my Summer of ‘98 anthem. Good for Kid, finally making it to the Rock & Roll Hall of Fame.


Watch the festivities from last night below:


The induction ceremony will take place on Friday, April 6 at the Smoothie King Center in New Orleans.