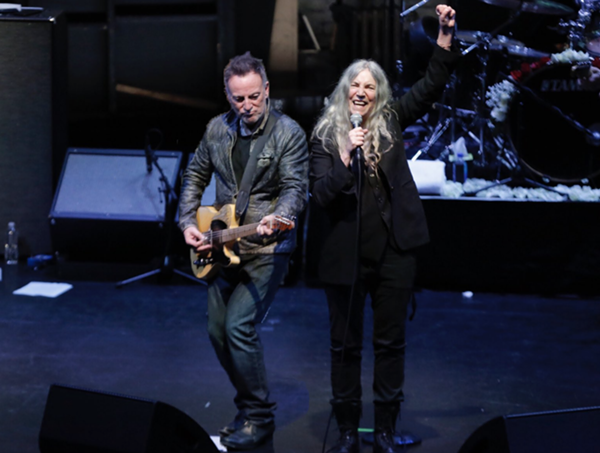 Former metro Detroiter and godmother of punk, poetry prose Patti Smith reunited briefly Monday night with musical cohort Bruce Springsteen. The occasion? The Tribeca Film Festival premiere of Smith's concert film Horses: Patti Smith and Her Band. Directed by Steven Sebring, the film documents one of the final performances of the poet's seminal album Horses which was performed in its entirety at the Wiltern Theatre in Los Angeles for the record's fortieth anniversary in 2015.

Smith, who played a short six-song set after the film, was joined by "The Boss" for a performance of " the Night" — a song written by Springsteen and made popular by Smith in 1978.


To close out the set, Smith invited daughter Jesse Paris Smith and  R.E.M frontman Michael Stipe for "People Have the Power" from 1988's Dream of Life.


Though Smith was born in Chicago and grew up in New Jersey, the now 71-year-old married Michigan native Fred "Sonic" Smith of the MC5 in the 70s and moved with him to St. Clair Shores where they lived until Fred's death in 1994.

Watch the trailer for Horses: Patti Smith and Her Band below: