Eastside Elvis prepared to be sighted at Cellarman's in Hazel Park 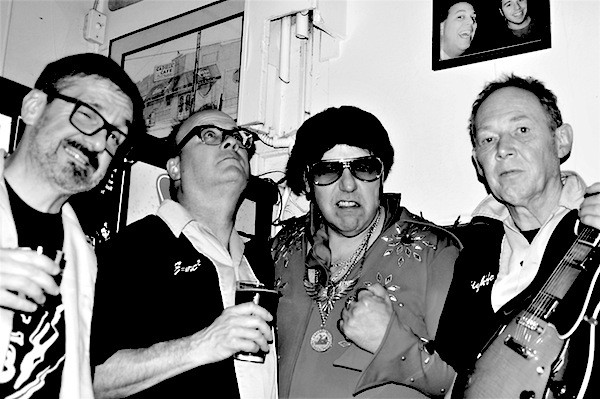 There’s an Elvis-themed band that for 12 years now has been appearing on the stage at the Cadieux Café and at festivals around metro Detroit. It’s called Eastside Elvis & the Motor City Mafia, and part of the band’s staying power is its sheer musical firepower: The band features guitarist Bruce Bryson (formerly of Trains Can’t Stop and Spat!), bass player Tim Taebel (formerly of Twitch and Noise Lab A/X), drummer Tim Suliman (formerly of Popsicle Shiv, DCFC Northern Guard and the College of 'Pataphysics' Marching Band) and vocalist and Head Elvis in Charge Paul Misuraca (formerly of Mega-Weedge and Douche & the Bags).

But the band’s longevity also comes from the way this just isn’t your typical Elvis tribute band. They mix up the repertoire at shows, and often play stuff the gospel-loving Tupelo truck driver would have given a hearty, “Naw, man.” No Elvis can touch some of the band’s covers with a 10-foot pole — unless it were Elvis Hitler.

In advance of the band’s gig at Cellarman’s in Hazel Park this weekend, we sent the guys some questions and got about what we expected back.

Metro Times: How did this all start?
Eastside Elvis: It began in 2002 as a costumed karaoke performance at the Cadieux Cafe. The current line-up started in 2006 and has been going strong ever since.

MT: But it's not all Elvis is it? You guys also do Misfits covers, right? Is that because Glenn Danzig and Elvis have something in common?
Eastside Elvis: Yes, we love Misfits covers and we suspect that Glenn is the love child of Elvis and Poison Ivy from the Cramps

MT: What other bands' material do you cover?
Eastside Elvis: Depending upon the gig and our mood, we’ll throw in some Dead Kennedys, Kiss, Alice Cooper, Motorhead, Doors, Little Richard, Iggy Pop, or Black Sabbath just to spice it up

MT: What can people expect to see at your show at Cellarman's?
Eastside Elvis: Rocked-up classic Elvis tunes intermingled with classic rock, old-school punk, sweat, and fun! Plus there will be awesome meads, ciders, and craft brews all made on the premises.