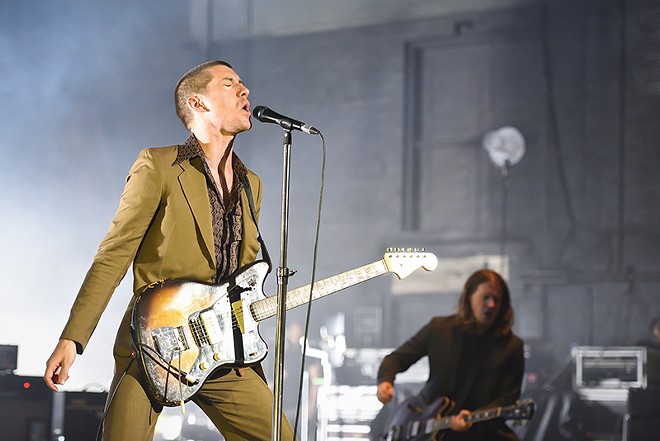 Against all odds, British band Arctic Monkeys survived the mid-2000s post-garage rock hangover to become one of the biggest rock bands of 2018. Exhibit A: the band's sold-out Masonic Temple show in Detroit on Wednesday night, where the crowd went positively bananas.

The band returned the Motor City love by paying homage to one of Detroit's biggest rock bands, the White Stripes, busting out a cover of White Blood Cells deep cut "The Union Forever." One fan caught the performance on video, which you can watch below:


Arctic Monkeys frontman Alex Turner took to the stage in a loose-fitting suit, sunglasses, and recently-sheared hair, looking every bit the part of a breezy rock band leader at the top of his game. Oftentimes, Turner swapped his guitar out to sit behind the keyboard or simply take to the mic as if he was a lounge crooner — fitting, given the experimental, jazzy, and lounge pop sounds of the band's 2018 release, Tranquility Base Hotel & Casino. But Turner's best asset has always been his brooding lyrics anyway, and his cool demeanor was enhanced by a tight live band — which at times expanded to 7 players, who fleshed out a career-spanning setlist by adding extra muscle.

Arctic Monkeys' well-earned status as a rock 'n' roll pillar is thanks in no small part to the band's 2013 record, AM, which seemingly arrived arena-ready with plenty of Black Sabbath riffs and call-and-response lyrics, which the Detroit audience ate up live. For the encore, Turner told the audience, “We’ve got one last question for you,” before launching into AM's heavy-hitter "R U Mine?" In Detroit, the answer appears to have been a resounding "yes."