Celebrities, presidents, take to Twitter to pay their R-E-S-P-E-C-T to Aretha Franklin 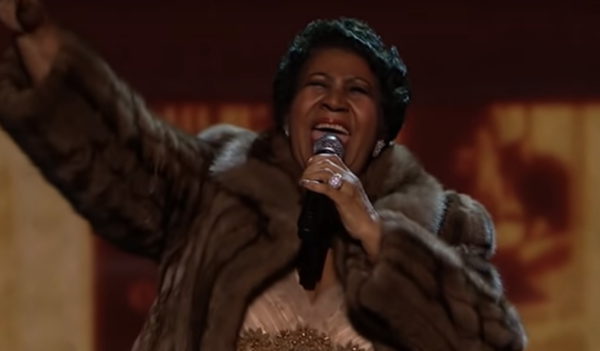 On a day where theatre marquees are displaying the image of the late icon, radio stations have switched over to wall-to-wall Aretha songs, her hits are topping the iTunes charts, and people all over the world are celebrating the remarkable life and legacy of Detroit's Queen of Soul, proof of her widespread impact cannot be escaped. Just take a look at your Twitter feed.

Aretha, for many, was more than a singer, she was a beacon of light, hope, and empowerment. Though to describe her influence in 280-characters seems impossible, everyone from President Obama, Oprah, Paul McCartney, and even NASA have taken to the social media platform to share memories and declare their love of Aretha Franklin who died surrounded by family today at the age of 76.

Aretha was Detroit’s sister, auntie, momma, Queen and homegirl — all in one career. There are few people that defend, honor and protect someone the way we did Aretha. You can talk about our economy, and our crime, but say something about Re-Re, and you’ll get dealt with. Quick.

Watching Aretha Franklin perform at the White House, and on so many other occasions, made time stand still. @BarackObama and I are holding Aretha’s family in our hearts right now. She will forever be our Queen of Soul. pic.twitter.com/NhHsbKijpl

Mourning the loss today of @ArethaFranklin who shared her spirit and talent with the world. She deserves not only our RESPECT but also our lasting gratitude for opening our eyes, ears and hearts. Rest in eternal peace, my friend.

The Queen of Soul, Aretha Franklin, is dead. She was a great woman, with a wonderful gift from God, her voice. She will be missed!


Aretha helped define the American experience. In her voice, we could feel our history, all of it and in every shade—our power and our pain, our darkness and our light, our quest for redemption and our hard-won respect. May the Queen of Soul rest in eternal peace. pic.twitter.com/bfASqKlLc5

My thoughts on Aretha Franklin pic.twitter.com/eAIxByt1Me

👑 Aretha.....Go Gently Into That Good Night.Your Glorious,One Of a Kind Voice Will Be With Us Forever🙏🏻.
You were Always Just Beyond Our Reach#SkyLark


The whole world will miss her but will always rejoice in her remarkable legacy. The Queen is dead. Long live the Queen. #RIPArethaFranklin

Very sad to hear the news about Aretha, she was so inspiring and wherever you were she always brought you to church. pic.twitter.com/GMCzQRkahc

Today has always been a hard day for me, and now the “Queen Of Soul” Aretha Franklin has left us, this loss saddens my heart not only was she a fellow Memphian, but she was also my inspiration to sing 😢 pic.twitter.com/amLqmcGvri


Aretha was such a timeless inspiration to me and so many others, the ultimate queen, thank you for the gift of your voice, music and unshakeable soul 🙏🏼 pic.twitter.com/me3FXBY4WZ

Aretha Franklin. The Queen of Soul. The Icon. The ultimate singers' singer. The greatest singer and musician of my lifetime. The power of your voice in music and in civil rights blew open the door for me and so many others. You were my inspiration, my mentor and my friend. pic.twitter.com/QD9pxvGLLh


Consequence of Sound shared this touching video of David Bowie presenting Aretha with a Grammy in 1975.


Our heartfelt condolences to the family and friends of Aretha Franklin. A symbol of strength and soul that will live on in Detroit and beyond.

I was honored to present Aretha Franklin with the key to our city last year at her last show in Detroit. She earned the love and respect of millions of people, not just for herself, but for the city she loved so dearly and called home. We are deeply saddened that she has passed. pic.twitter.com/XyirDp2u6b

Sending lots of love and prayers for Aretha. Truly a woman god has his hands on. All of my RESPECT - forever. Kid Rock pic.twitter.com/MLwpXWS5sT

Our deepest condolences to the family and friends of Aretha Franklin.

Aretha was a groundbreaker and an icon whose legacy will live on forever. pic.twitter.com/dmYrfpDOjC


The Lord has come to take my “Soul Sister” home. Aretha Franklin was a true Icon in Detroit and around the world. My prayers go out to the family during this time. Her legacy and friendship will forever be remembered-Martha Reeves 🌹

Let’s all take a moment to give thanks for the beautiful life of Aretha Franklin, the Queen of our souls, who inspired us all for many many years. She will be missed but the memory of her greatness as a musician and a fine human being will live with us forever. Love Paul pic.twitter.com/jW4Gpwfdts

Lady Soul. The first woman inducted into the Rock & Roll Hall of Fame, Aretha Franklin was an artist of passion, sophistication and command, whose recordings remain anthems that defined soul music. Long live the Queen. pic.twitter.com/3gJDuV2KF4


Even NASA chimed in.

We're very sad to hear about the #QueenofSoul passing. Rock Steady Aretha.
From your steady rock out in space. pic.twitter.com/1rbBRlRUW7