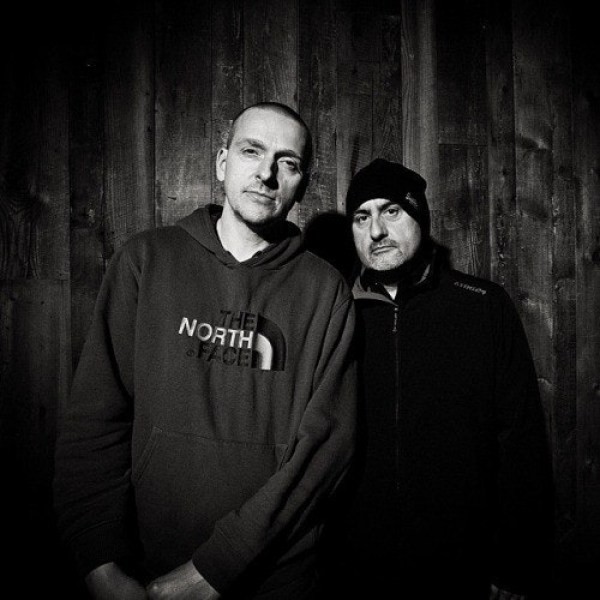 Godflesh, in a word, is intensity.

This intensity is amplified and controlled by Justin Broadrick (guitar, vocals, programming) and G. C. Green (bass). The group coalesced in Birmingham, England in the early ‘80s, but didn’t release their first proper studio album — Streetcleaner  — until 1989. It became an instant landmark of harsh, bleak, and oppressive music, and stood out not only for its heaviness but also for its innovative use of a drum machine.

By fusing heavy metal with industrial, and subsequently with electronic and dub, Godflesh created a singular sound, one that would become a primary influence on numerous industrial metal, post-metal, experimental metal, and extreme metal bands.

The group’s experimentation with style took many forms throughout the years, including the use of a human drummer, but various pressures led to its disbandment in 2002. In 2010, the original duo reunited, initially just to perform at that year’s Hellfest in France. They agreed that machine percussion was critical to maintaining their sonic integrity. More reunion performances eventually led to new studio albums, which have been some of the most critically regarded of the band’s career.

2014’s A World Lit Only by Fire is a minimalist metal masterpiece, the sensation of having one’s soul pummeled, while 2017’s Post Self is a stinging exploration of their post-punk roots, coldly contemplative, with metal riffs exchanged for atmosphere and noise.

A Godflesh performance, especially one in the States, is not to be missed. We’re lucky enough to get the opportunity to bear witness to their intensity live at El Club this week, and Justin Broadrick was kind enough to answer some of our questions about his musical motivations and more.

Metro Times: What motivates you to keep making music as Godflesh now, and how is it different from when you first started making music?
Justin Broadrick: I'm motivated to make music I don't hear elsewhere. Godflesh is extremely idiosyncratic, and, with age, I've recognized this even more and feel that this band is absolutely necessary and we will try to sustain it as long as I am physically able to keep this going! The only real significant difference between Godflesh 30 years ago and now is that we are somewhat wiser, which affords a more measured response to the craft — I feel much clearer about what I'm trying to achieve with Godflesh now than I ever have.

MT: What does Post Self mean to you? The album as a whole as well as the title.
Broadrick: Post Self is philosophically loaded, like all Godflesh releases. In short, Post Self means loss of self, feeling like an alien in one's own skin, which I personally have suffered most of my life, which eventually I discovered was a symptom of extreme anxiety and depression, pretty much the impetus for all the music I make!

MT: Do you have any surprising influences?
Broadrick: I wouldn't know what would be considered surprising. Musically I've often surprised people with that The Stranglers were my main influence as a kid to even begin making music.

MT: The sounds of Godflesh are the sounds of the city. What has it been like for you now to live in a rural area while creating this type of music?
Broadrick: I was born and raised in Birmingham, England – the UK's second biggest city. It's Middle England and was extremely urban in the ‘70s and ‘80s which was my youth. It had an indelible effect upon me, hence my music. I always wished to one day escape the city, which fortunately and somewhat ironically was achieved via my music. I have now spent half of my life living in rural areas exclusively, and there's no turning back. For me, cities are an overload on my senses — I can't breathe. I don't feel we should live like this, ultimately.

MT: What informs your vocal style? It is so visceral.
Broadrick: Key vocalists that affected my style when I was young are people like Cal from Discharge, Jaz Coleman of Killing Joke, the early vocal stylings of Michael Gira/Swans, and many more.

MT: You have said, “Godflesh is misinterpreted as an attacking thing where it’s more of a defensive thing.” Can you elaborate on this?
Broadrick: That's an old statement I think, and probably in response to how metal music was and still is perceived. I was attempting to show that Godflesh is not about being the wielder of power, but suffering at the hands of those who wield power.

MT: Why are extreme sounds so appealing to you?
Broadrick: I have no real idea. It's something embedded in me from the earliest age I can recall — extreme sounds have always just connected with me, in nearly any context.

MT: Another thing you have said about being known as one of industrial metal's founders is: "I think I accidentally formed this genre. I don't even really know what this genre is; I just make music." Can you elaborate on that?
Broadrick: Yes, I still somewhat stand by this statement, although I don't think it was down to just me, haha! 'Industrial metal' as a term, like most genre-specific terms, is just too limiting. I think Godflesh is so much more than what that term implies. But I did consciously wish to make some odd hybrid of early industrial music and primitive punk/metal, albeit with a drum machine.

MT: You have so many projects – how do you understand yourself differently through each one? [Note: a very short list includes the hazy experimental post-metal of Jesu, the brutal electronica of JK Flesh, and the harsh electronic noise of Greymachine, not to mention the seemingly endless amount of solo work, remixes of other artists, and collaborations.]
Broadrick: Each one is me and an exploration of sound and textures I love and wish to pursue, albeit in a flawed fashion. My music is a flawed experiment in the music I love. I also quite simply get bored/ tired of working on the same thing over time. I need change, I need to be refreshed and challenged.

MT: With your background and interest in heavy electronica/techno, I wonder if you have any fondness or soft spots for Detroit techno?
Broadrick: So much so that I wished it was common knowledge! I thought my love of Jeff Mills was common knowledge, but maybe not. But the early sound of Jeff Mills, Robert Hood, Plastikman inspired me from the first moment I heard them in the early ‘90s. My JK Flesh project is directly influenced by these artists.