UFO Factory plots October reopening after a year of uncertainty

More than a year after UFO Factory was declared condemned by the city, co-owner Dion Fischer announced exclusively to Metro Times that the Detroit music venue is set to reopen Oct. 26.

Fischer says the venue will reopen in its original Corktown location at 2110 Trumbull Ave. looking just as we left it, though with a few upgrades of the house sound system and interior ambiance. Some recent changes, however, will leave the popular spot a bit of an alien in its own neighborhood.

It's been a difficult year for UFO Factory, which first opened its doors in Corktown in 2014. Last year, the bar suffered foundational destruction on its north wall during the early construction of the $150 million mixed-used Elton Park development next door, causing the venue to shut down indefinitely. The sudden closure left 15 UFO employees out of work, which spurred a successful benefit party at El Club (where over $18,000 was raised).

Immediately following the incident Fischer told Metro Times he could not speak to whether or not he believed developer Soave Enterprises had intentionally damaged the venue, though many have speculated that this was no accident considering the developer's previous business dealings. Fischer added, "judging by our past interactions, I don't think they have our best interest in mind." 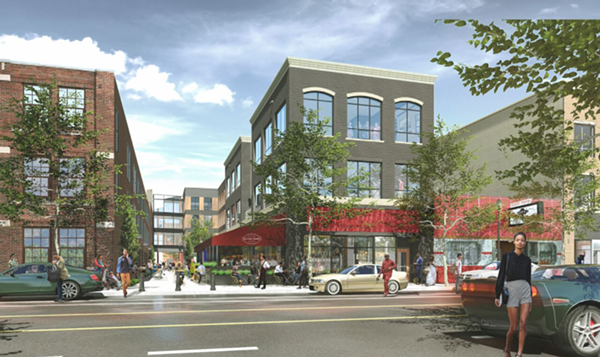 While Elton Park appears to be swallowing UFO Factory, having taken up real estate on either side, behind, and above the venue and art space, Fischer is excited to announce the stacked lineup for UFO's grand reopening weekend, to be announced soon. Fischer says the entire month following the Oct. 26 launch will serve as a celebration, which will include "UFO style performers, DJ's, karaoke, and more."

Fischer says they also plan on bringing back Laika Dog, the artisanal hot dog pop-up that operated out of UFO regularly. But that, like the rebuild, will come in time. For now, Fischer is excited to be back in business and for UFO Factory's faithful supporters to be able to come home.