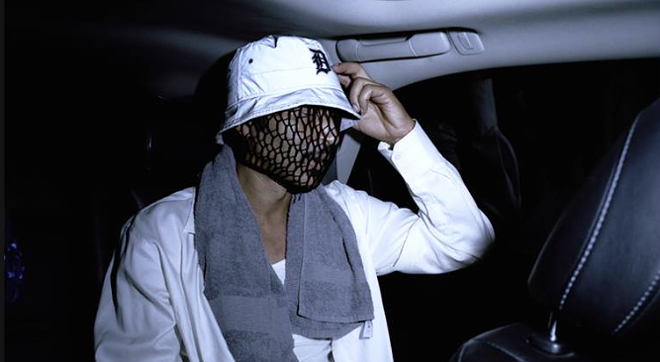 Highland Park police Chief Chester Logan says the incident took place at approximately 10:24 p.m. on Saturday, Jan. 12 at the 16000 of Woodward Avenue in Highland Park. He showed police body cam footage that shows that Moodymann (real name Kenny Dixon Jr.) was approached by police while sitting in a white 8-person passenger van. Logan says that police were in the vicinity of 16000 Woodward after pursuing a traffic violation when they noticed an individual working outside the parked vehicle and chose to investigate for possible illegal scrapping.

Moodymann gets guns drawn on him in confrontation with Highland Park police
By Devin Culham
City Slang
As the police approach the vehicle, an officer is heard in the footage saying that Dixon "may have a gun in the car." Dixon is heard telling approaching officers that he is doing cleaning work on his own property. One police officer then asks Dixon to step out of the car, and Dixon refuses. The remaining officers, of which Logan says were "8 or 9," get continuously more aggressive toward Dixon, who refuses to unlock the car doors. The officers are then seen pulling guns and pointing them toward Dixon in the parked vehicle.

In the footage, Dixon unlocks the vehicle and is seen being frisked and put in handcuffs. Officers then a concealed pistol license in the vehicle and a handgun registered to Dixon.

Police are then shown arguing with Dixon that he should have immediately told the officers that he had a CPL. In the footage, Dixon is heard saying that he was trying to "figure out what was going on" and that the police officers "scared the shit out of me."

Highland Park police release statement on aggressive confrontation with Moodymann
By Devin Culham
City Slang
"Really, this is the only guy that came to me approachable," Dixon says, referring to the first officer that approached the vehicle. "We having a conversation and you guys just came over here and interrupted me. The man would have gotten anything out of me."

Logan admits that he "sees some problems" regarding the behavior of the Highland Park and that the incident is still under investigation.

Dixon was taken into custody but has been released. He was issued several misdemeanor citations, which Highland Park Police did not comment on.

Logan, an African-American male who has been in the force for nearly 50 years, says he does not believe that racism played a factor in the incident.


Editor's note: The article previously attributed the Highland Park Chief of Police as Chief Chester Larson. The article has been updated to reflect the correct name.