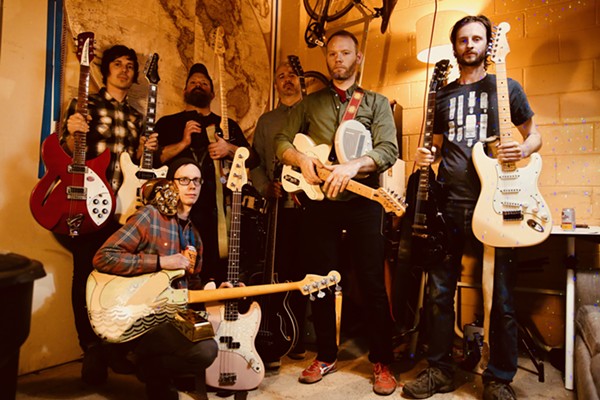 Ferndale-based experimental indie rockers Bars of Gold debuted another new single from their upcoming album Shelters Tuesday. The record, due out April 12 on Equal Vision Records, is the band’s first in six years. The song, called “$20,” can be heard below.

Vocalist Mark Paffi channels James Brown on “$20,” while the mash of percussion and keys brings out a bit of off-brand funk that fans of Bear vs Shark, the early-2000s band from which half of Bars of Gold came, will surely enjoy.

“The title is jokingly about when James Brown (a big influence for us) would fine his musicians on stage for mistakes they’d make while playing,” the band tells Brooklyn Vegan. “It’s our version of a James Brown / Fela Kuti song: “He’d our asses $20”. It’s the first song we wrote in our new practice space and we wrote it all separately (which is the opposite of how we normally write), and pieced it together from there.”

The polyrhythmic “$20,” contrasts the first single released last week, “Sometimes,” which is more straightforward but just as soulful and groovy.

Bars of Gold will perform songs from Shelters at the record release party on Friday, April 12 at The Loving Touch in Ferndale. Tickets are $12 and can be purchased at ticketweb.com or at Woodward Avenue Brewers in Ferndale.


Mike Dionne is an editorial intern for Metro Times.