Each week, Metro Times rounds up must-see performances by metro Detroit's own.

For Bars of Gold, the experimental Ferndale outfit, it’s all about James Brown. Well, sort of. When it comes to the band’s latest record, Shelters, which marks the sextet’s return to recording after a six-year hiatus, it’s mostly about a lesson in garage rock grit and frenzied and frenetic funk. The band dropped a pair of singles last month: “Sometimes,” a white-knuckle drive-core jam, and “$20” — a pieced-together guttural nod to Brown and the first track the group wrote in their new space. Bastardous and Teener are also on the bill. 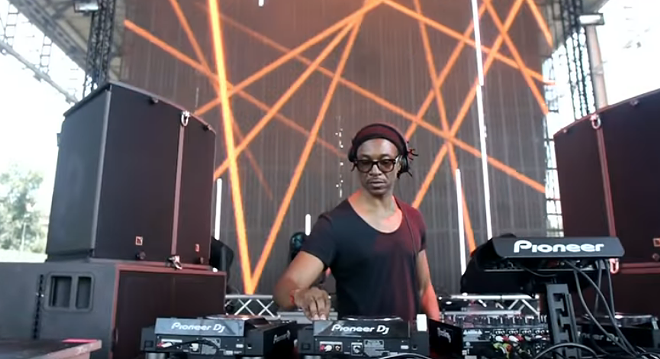 For more than 20 years, Detroit innovator Stacey Pullen has been concocting his interpretation of an array of influences and is one of the pillars of techno. Pullen pulls from fellow Detroit-techno greats the Belleville Three, whom he worked under, and his style has been compared to that of jazz legend Herbie Hancock, which is how Pullen has managed to create a complex transportive and spiritual house aesthetic.

What’s better than 15 Detroit bands? Try 15 Detroit bands performing songs by 15 bands with some tight Detroit ties. Entering its ninth year is Detroit x Detroit — where local artists come together in partnership with School of Rock to fund a scholarship for a rock star in training. Each band will perform a three-song set across two alternating stages. This year, the Fruits will take on the divinity that is Madonna, while Scarlet Lies will channel the Stooges, Dead in 5 will kick out the jams of the MC5, the White Stripes will get the Electric Honey treatment, Jammie Hazeman & the Honey Riders will get shady with Eminem tracks, and Radio Wire Empire taking on the boys of JR JR.

The Luddites
The Luddites are not your typical 11-piece acoustic folk orchestra. The Detroit-based genre-bending outfit has been taking risks with its sonic concoctions for three decades. Calypso and ragtime? Sure! Rock with Bourbon Street swing? No problem! And don’t think that just because the Luddites prefer to keep it unplugged that they are by any means quiet. A rebellious clamoring of horns, strings, keys, tittering percussion, and sultry vocals by Lisa Goedert makes a Luddites performance larger than life.

Audra Kubat, Ed Dupas, Emily Rose, and Josh Rose
Detroit folk mainstay Audra Kubat is no stranger to the ebbs and flow of seasonal changes; in fact, much of her music, intimate in nature, is rooted in these feelings. The founder of the Detroit Folk Festival, which celebrated its sixth iteration last year, Kubat remains one of the most active performers, educators, and storytellers in metro Detroit’s rich folk scene. For her performance at Hamtramck’s Ghost Light, Kubat will be joined by Ann Arbor’s Ed Dupas, six-time Detroit Music Award winner Emily Rose, and Ada, Mich. singer-songwriter Josh Rose.

We Came as Romans

Last year, metro Detroit metalcore band We Came as Romans suffered an immense loss when the group ’s longtime co-vocalist Kyle Pavone died of an accidental overdose in August. Instead of putting life on hold, a foundation was created in Pavone’s name to help artists in their struggles with addiction and recovery, and We Came As Romans toured with Bullet for My Valentine shortly after, announcing that they would not replace Pavone. The band’s current co-headlining tour with Crown The Empire will stop here at home before wrapping up in Texas later this month.

Hailing from Grand Rapids, post-hardcore rockers La Dispute are having a moment. Fresh off the release of Panorama, the band’s fourth record and first since signing to Epitaph Records, La Dispute is exploring a new shade of rage. Panorama boasts bursts of respite, elements of jazz, all anchored to the band’s rapid-fire catharsis. Gouge Away and Slow Mass are also on the bill.