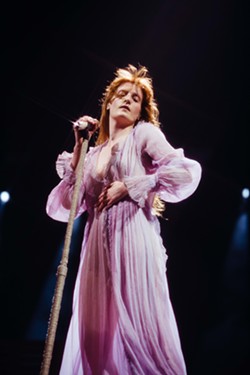 Every once in a great while, a singer comes along whose vocals peel apart the atmospheric layer between heaven and earth, and for the last 10 years or so Florence Welch has been that singer.

Since, 2007, Welch and her band have been carrying the baroque-pop torch with a graceful blend of mainstream appeal and independent essence. The current tour is in support of 2018’s High As Hope — the ethereal outfit’s sweeping fourth record that creates space for Welch’s cathartic explosions. Most recently, though, Florence and the Machine provided a rare closing song for a Game of Thrones episode (which, when it aired, broke a Shazam record of 300,000 song inquiries in 24 hours).

The band performs on Friday at DTE Energey Music Theatre. Indie R&B singer-songwriter Blood Orange is also on the bill.