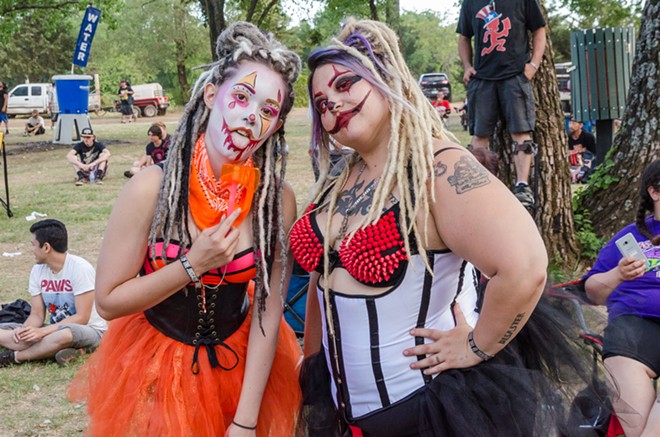 There are only two words to describe the upcoming “Soopa” Gathering of the Juggalos hallmark anniversary: Whoop whoop!

For 20 years, Detroit's horrorcore collective Insane Clown Posse has hosted “the greatest family reunion on earth” — a mayhem-filled dark carnival better known as the Gathering of the Juggalos where inhibitions are chopped to bits by a hatchet-wielding man and freak flags fly with zero corporate sponsorships. Whoop!

What started out as a two-day fringe sub-cultural appreciation of all things clownin' at the Novi Expo Center in 2000 has exploded like an agitated case of Rock N' Rye, and now welcomes thousands of Juggalos and Juggalettes to partake in the weekend-long madness.

Touted as “the longest-running, fully independently operated hip-hop music festival in the world,” the four-day festival will return to Shimmer Forest in Springville, Indiana, starting July 31 through Aug. 3 with camping, parties, carnival rides, sideshows, comedy, wrestling, and a musical lineup of more than 40 performers.

Tickets for the Gathering start at $195 and can be purchased here.