Review: The zombies in Jim Jarmusch’s 'The Dead Don't Die' are perhaps a bit too self-aware 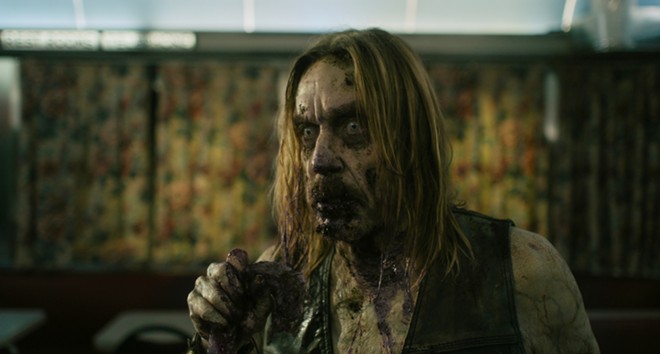 Strange things are going down in drowsy little Centerville, Penn. — the sun hangs low but stubbornly refuses to set, the birds have gone quiet, cell phones are failing, and even the ants seem agitated. Yet even with all this weirdness in the air, the top priority for police chief Cliff (Bill Murray) is swinging by the diner and picking up some coffee and doughnuts. His deputy, Ronnie (Adam Driver) remains calm, even though he keeps repeating the fatalistic premonition “This will end badly.” Meanwhile Chloë Sevigny’s Officer Mindy cannot maintain her cool and, understandably, becomes increasingly unhinged as the ghoulish chaos starts breaking out all around her. Her stoic male co-workers fail to break a sweat; there’s an undead riot going on, but it’s nothing to lose your head over.

Indeed, the world ends with a shrug in The Dead Don’t Die, a self-aware and faintly cynical spoof of horror flicks that applies a thick frosting of ironic detachment to the standard zombie movie layer cake.

Tragically hip film punk Jim Jarmusch has been an indie icon since the mid-'80s, with deadpan underground classics like Down By Law and Mystery Train, and to his credit, if you aren’t attuned to his specific vibrations you might miss the joke. The ever puckish director gets a kick out of overturning our expectations, while gently mocking the audience for even having expectations to begin with. Here, he rattles through the graveyard of spooky movie tropes, and pays explicit homage to George Romero, the Founding Father of the undead genre, without holding any of it sacred.

Take for instance, the scene where our heroes enter a crime scene where the first victims of the outbreak have been cruelly disemboweled. We don’t get just one look at the grisly remains, but multiple, as each character takes a turn inspecting the corpses, with close-ups on the makeup effects, like we were thumbing through an old Fangoria magazine. There’s also a funny recurring bit where every time the film’s theme song (by alt-country crooner Sturgill Simpson) plays, the characters go out of their way to point it out, cranking it on the radio or even holding up a copy of the CD. The casual fourth-wall breaking and winks to the camera break the tension of the slowly building terror, but they also serve to disconcert the viewer and keep them thinking about the director’s intentions.

Occasionally the method gets in the way of the message; the humor is as dry as  a swimming hole on the moon, the pace is stilted, and the subtext is so meta you’ll need to have an IMDB tab open in your mind to keep up. All of the stock horror characters are here, but given their own quirks. Tilda Swinton swings for the fences as the kooky coroner, a Scottish oddball with a borderline autistic personality and Japanese fetish. She’s also got mad skills with a katana that you know will come in handy if you’ve ever seen a monster movie before. Steve Buscemi plays a grouchy farmer who sports a red “Keep America White Again” hat, but doesn’t actually extend his bigotry to humble neighborhood fixture Hank (Danny Glover), who sits next to him at breakfast every morning. Selena Gomez is on hand as a cutoffs-wearing sexpot who is unlucky enough to be passing through town, but who Cliff labels as a “hipster from Cleveland.”

Jarmusch even has a laugh with the pseudo-science explanation that most zombie fare can’t be bothered with; here it's due to “polar fracking” disturbing the rotation of the earth, allowing some environmental criticism to slide under the door. The fact that some of the characters seem to understand that they are fictional constructs only highlights the zombie-like haze of commercialism that most of us drift through in the real world. Only the eccentric Jarmusch would have the guts to have Tom Waits dressed up like a hermit, laying existential poetry over scenes of people getting eaten by a pack of their former friends and family — but, hey, that’s life and un-death for you.
Stay on top of Detroit news and views. Sign up for our weekly issue newsletter delivered each Wednesday.