Black Violin’s Kev Marcus on embracing stereotypes, meeting Obama, and why they might not pay a visit to the White House 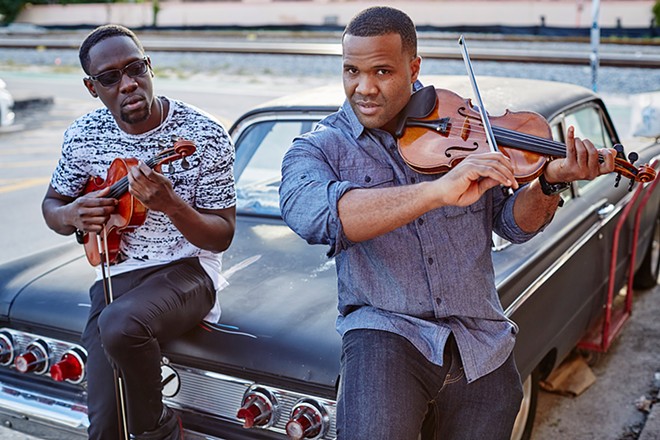 Six years ago, Kevin Sylvester and Wilner Baptiste, of Black Violin, found themselves eating shrimp cocktail with Alicia Keys, and discussing Django Unchained with Jamie Foxx and talking about chord progressions with Smokey Robinson. The occasion? The 57th presidential inaugural ball honoring President Barack Obama’s second term as the first Black president in the history of the United States.

“I remember most of the day really clearly,” Sylvester says. “As I’m walking up, Michelle leans in and says, ‘This is the man I was telling you about.’ So I tell [Obama] everything that I've ever done in my life has led up to this moment. And he chuckled and said, ‘The tough part is to figure out what to do next.’”

The truth is, the classically trained hip-hop violist and violinist are frequently in a state of figuring out their next move within the scope of their grand agenda: “To be well-intentioned in everything we do.” And topping a moment with the leader of the free world is harder than ever before.

The era-defining virtuosos will drop their third record, Take the Stairs, later this year — a follow-up to 2015’s Stereotypes, a record and title track that acted as a mirror to the obvious misconceptions surrounding two Black men wielding classical instruments.

“The reason I smile onstage is because I know I’ll completely pressure people’s perceptions of not only what a violin can do or what music can possibly sound like, but also of what a Black man is capable of,” Baptiste says on “Stereotypes” — a song that showcases the kaleidoscopic nature of what Black Violin stands for. Not only have they mastered the ability to translate classic boom-bap beats into frenzied string compositions, they’ve found a way to attach fully formed messages of positivity derived straight from their own experiences.

“I don't even think of it as overcoming a stereotype; I think of it as using the stereotypes to propel us even further,” Sylvester says, adding that the power of being told you can’t or you shouldn’t is enough to drive anyone to greatness.

“Whether you’re Danica Patrick, a woman driving a race car, or Tiger Woods, a Black guy playing golf, it's taking the stereotype and the things that happen to them uniquely because they're not supposed to be here and flip that thing on its head,” he says. “It's about embracing stereotypes and using them to your advantage.”

Sylvester and Baptiste (who go by Kev Marcus and Wil.B, respectively) met while attending Dillard High School in South Florida when both were encouraged to pursue music classes. Baptiste had set out to learn the saxophone but, after some not-so-divine intervention, found himself enrolled in string-oriented orchestra summer classes where he chose the viola for no other reason than no one else had wanted to play it. Sylvester, meanwhile, chose the violin. Together they would explore their shared love of hip-hop while studying classical composers, their compositions, and unknowingly stumbling on the unlikely cross-section between the two.

”I think of it as being very fortunate, but really it's just this amazing amount of coincidence,” Sylvester says of Black Violin’s trajectory. “I had the right teachers in the right situations at the right times that led us to the right decisions. And then, next thing you know, we're playing with Alicia Keys, playing with Diddy and all these people. And I didn't even get a chance to really sit and look at it.”

“It happened not quickly — it happened gradually — but there was always a door being opened for me,” he says. “It almost feels like hitting the lottery.”

After graduating from college — both were awarded with full-ride scholarships and attended school 500 miles apart — and before Black Violin, the musicians set their sights on becoming record producers making beats for other artists in a makeshift studio in Baptiste’s two-bedroom apartment in Miramar, Florida. Sylvester says they had created a functioning business plan, but it was people’s curiosity in the violin aspect of what the two were doing that informed their partnership out of the studio and onto the stage.

“To us, it was really like nothing, it was easy putting hip-hop and the violin together. It was really organic,” Sylvester says. “We were in the industry. We were in the business, but it took a little bit of noticing that every time we pulled the violins out, people were always blown away by it. How can we take this and make this the focal point of the business? We’re still trying to figure that out — how to exploit our talents, so to speak.”

Black Violin, on average, performs nearly six months out of the year, and many of those performances cater to students (sometimes as many as 100,000 over the course of 12 months). Both members view music education and community outreach as more than just something they do on the side; they see it as a responsibility to the world that opened so many doors for them.

“We've been blessed with this really great platform. If you have something like this, it's like you gotta use it. So we try to take a moment in whatever city we’re in and meet with some kids or bring them onstage, do a workshop with them, or do a master class, or just talk to them, or have them come onstage with us to perform,” Sylvester says. “We like to plant those seeds everywhere we go.”

So, back to what Obama said. What’s next?

“We're always growing as a band, as a brand, and as individuals. We're in different places. When Stereotypes came out, Wil didn't have any kids. He has three kids now, you know. I would say the first album is sort of your life's work, and every album after that is just an additional chapter in that book.”

As for their political aspirations?

“We've still never been to the White House, so that's still on our bucket list. It would depend on the occupants,” he laughs. ”But I would be interested.”