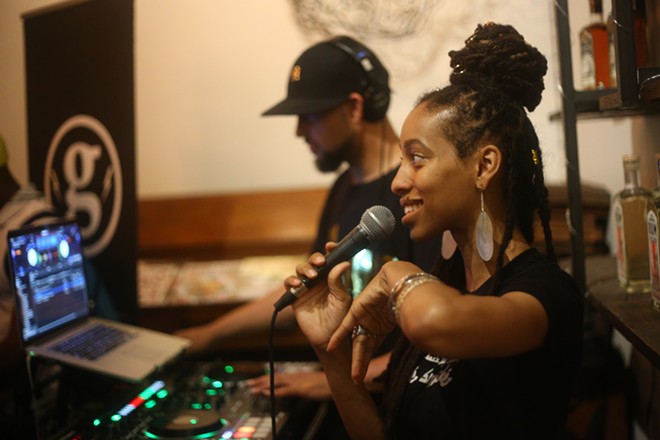 Detroit-based musician Suai Kee has been named director of Motown Musician Accelerator, a new philanthropy muscle of Motown Records aimed at helping musicians and music-tech startups in the city.

Kee wears many hats — she is a singer/songwriter who has performed in many of the city’s biggest venues as well as on tour with Solange and Kem, a mentor to people pursuing careers in the recording and performing arts, a former signee of Motown Records, and the creator of Fire Sign Recordings. As an eastside native, Kee tells MT she is excited to see how the program impacts the city as a whole.

“I am so pleased the program and sponsors are so dedicated to uplifting the Detroit music scene,” Kee says. “It’s not just about getting ready to change the lives of four people, we’re always saying community, community, community — how can we engage the music community, engaging the creative community, and putting artists into the resurgence of our downtown and midtown areas.”

The accelerator was unveiled on April 25 by Capitol Music Group. With the goal of fostering local talent and entrepreneurs, the accelerator is comprised of two new programs aimed at supporting the Detroit music scene.

One program includes individualized coaching and industry introductions — as well as a $20,000 grant — over a 12-week period. Grant money can be used for “career-boosting activities” such as booking studio sessions and photo shoots, funding travel, and buying new equipment.

Additionally, there will also be quarterly workshops run by industry professionals who will offer insight into the industry, with topics ranging from distribution to songwriting. Offered in both Detroit and Hollywood, these workshops are free and open to the public.

“Motown Musician Accelerator is an educational and grant program designed to help get Detroit artists to the next level in their careers,” Kee says. “We really want to try to get them to their next level, figure out where they want to go, and set up a plan of action so they get there, and of course they get the $20,000 grant, the career mentoring, connections, and meetings with lots of industry mentors who they might not have been able to reach out to on their own.”

Sponsors for the accelerator include the Esther Gordy Edwards Family Foundation, Microsoft, Gener8tor, and Hassan Bazzi. The accelerator is sponsored through a partnership with Motown Records, Motown Museum, Capitol Music Group, and TechTown Detroit.

Paul Riser, managing director of tech-based entrepreneurship for TechTown Detroit, tells MT he is pleased with Kee’s work as director and what the accelerator offers to Detroit musicians.

“Detroit is a mecca for music, historically. There’s awesome talent and a huge desire,” Riser says. “Because of the historical talent and history, and Detroit being home of Motown — and the great artistry we have around music with engineers, tech, the resurgence and regrowth of the city — it’s all coming together at a great time in a great way.”

Currently, a rigorous selection process is taking place to decide which four musicians and groups are part of the inaugural accelerator class. Kee says she is looking forward to the program's commencement in August, and that as the submissions have begun coming in she is finding herself surprised by the diversity of music.

Applications are being accepted until July 14.

The panel of local and regional industry professionals selecting the recipients will have a difficult time narrowing the applications down to four, Kee says. She and Riser say they are looking for individuality, potential, drive, commitment to Detroit, and coachability in applicants.

“I’m just looking for someone who has a strong grasp of who they are as an artist,” Kee says. “I’m hearing music out of Detroit that I really didn’t know was coming out of Detroit.”