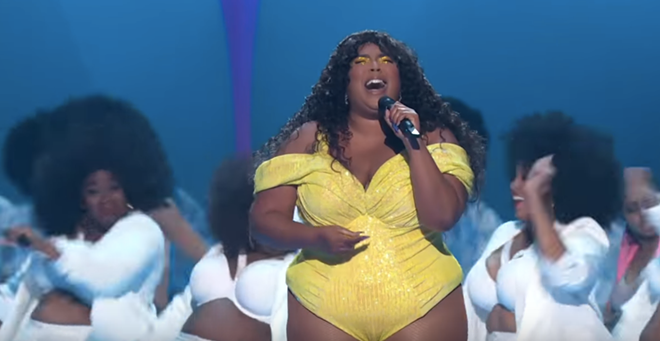 If you had no idea that a giant inflatable ass was capable of twerking on the national stage, well, neither did we.

Just two days after former President Barack Obama tweeted his and Michelle's annual summer playlist — which lists Lizzo's “Juice” at No. 6 — the Detroit-born twerking flutist brought the booty, positivity, and a bedazzled tequila bottle to the MTV VMA stage on Monday night where she performed “Truth Hurts” and “Good as Hell” — two songs that are two and three years old, respectively.

Lizzo appeared in a corseted raincoat in front of a comically large, thonged, inflatable ass that clenched and swayed not unlike a malfunctioning inflatable tube dude outside of a car dealership, with her usual bevy of cheeky dancers.

Colorful. Vibrant. Joyful. Unapologetic. Powerful. How could you not love @lizzo? pic.twitter.com/bPLZB3BZ1O


"Let me talk to y'all for a second. I'm tired of the bullshit. And I don't need to know your story to know you're tired of the story, too. It's so hard to love yourself in a world that doesn't love you back, am I right?” Lizzo said after stripping down into a Bardot-style yellow one-piece, and headed into a dreamy rendition of “Good as Hell” complete with cloud clad dancers. Oh, and she slammed a mighty swig from a crystal-encrusted Patrón bottle mid-performance.

Though Lizzo lost in four VMA categories, among them Best New Artist (which went to an absent Billie Eilish), earlier this month Billboard reported that “Truth Hurts” may still be eligible for 2020 Grammy Award nominations, even though the song was released in 2017 as a stand-alone single. It was later added to this year's deluxe edition of Cuz I Love You, thus making it a possible contender.

Watch Lizzo's booty-ful VMA performance below.
Get our top picks for the best events in Detroit every Thursday morning. Sign up for our events newsletter.