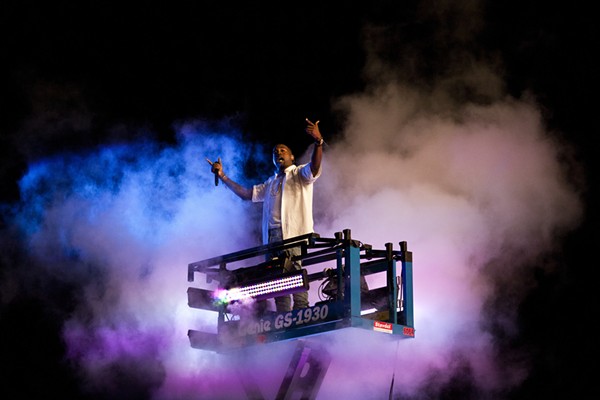 Tickets are allegedly dropping at noon. (Yes, we just got this news.)

A publicist for the venue says that tickets did not actually get released at 10 a.m. as previously reported. The venue is still waiting for confirmation from Kanye's team. We'll update this post when more information becomes available.

The free show is set for noon on Friday at Detroit's Aretha Franklin Amphitheatre, though tickets are required. They'll be available on Thursday via Ticketmaster.

A call went out for local singers to audition for the event's choir at the event earlier this week. Previous stops have featured gospel choir renditions of traditional hymns as well as pop songs, including West's "Ultralight Beam" and Nirvana's "Smells Like Teen Spirit."

"There's no praying," West's wife, Kim Kardashian West, has previously said of the event. "There's no sermon. There's no word. It's just music, and it's just a feeling." In another interview, she described it having "a Christian vibe." "But there’s no preaching," she said. "It's just a very spiritual Christian experience."

Some Black critics have called West's event "blasphemous," pointing to the pricey "Church Merch" line of sportswear for sale at previous stops which includes items like a $225 sweatshirt emblazoned with the words "Holy Spirit" and $50 socks that say "Jesus Walks." (After backlash, West removed his online "Church Merch" store.) Others have called "Sunday Service" a "cult."

Earlier this year, construction of a compound of Star Wars-inspired domes on West's 300-acre property in Calabasas, California was halted because West had not secured the proper permits.