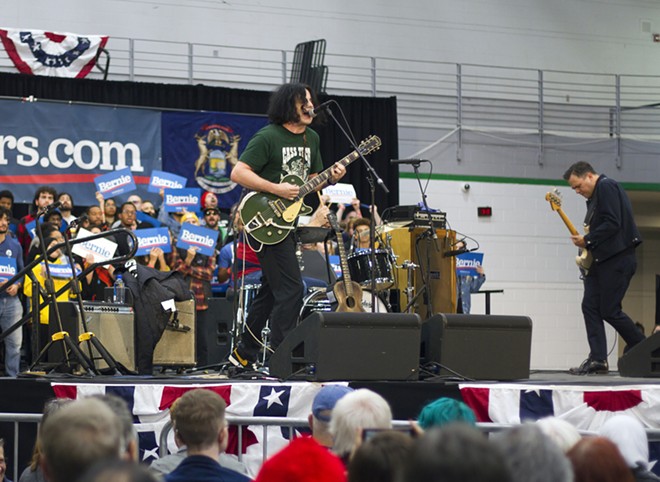 Though Jack White's songs have occasionally touched on political topics — his former band the White Stripes blasted corporate greed on "The Big Three Killed My Baby" and the hypocrisy of the United States' immigration policy on "Icky Thump" — the rock star has largely stayed out of electoral politics. But White made a rare political endorsement this week at a rally for Democratic 2020 presidential candidate and Vermont Sen. Bernie Sanders, which was held at White's alma mater Cass Technical High School on Sunday.

"I've never done a political rally before," White said during a short performance. "I'm not really politically affiliated too much, I don't consider myself a member of any party or anything. I just listen to the issues, and when the issues come up, I try to pay as much attention and I want to listen to somebody and to understand if they're telling me the truth, if I trust them. And Bernie Sanders is telling the truth and I really do trust him."

White said the main issue that got him involved was Sanders' stance on the Electoral College.

"What really got me coming here was him saying he wants to abolish the Electoral College, which I think is the reason we're in the mess right now," White said. "I have this silly notion that the more Americans that vote for somebody, that person should be president. Isn't that kind of funny?"

Hillary Clinton received 2.87 million more votes than Trump — the largest margin ever for a losing candidate.

White played a short set at the beginning of the rally, joined by nephew (and former Metro Times contributor) Ben Blackwell on drums and fellow Cass Tech alum Dominic Davis on bass. The setlist included "Icky Thump," "Corporation," "Black Math," "We're Going to Be Friends," a cover of Bob Dylan's "License to Kill" (the lyrics changed to "Who's going to take away Trump's license to kill?"), and "Seven Nation Army." Detroit hip-hop duo Passalacqua and singer Supercoolwicked also performed at the rally.

White left the stage with a short message for Sanders: "Good luck, Bernie."

White is no fan of Trump. Toward the end of the 2016 campaign, White's Third Man Records started selling "Icky Trump" T-shirts with the lyrics to "Icky Thump" printed on the back: "White Americans, what? Nothing better to do? Why don't you kick yourself out, you're an immigrant too."

At the rally, Rep. Rashida Tlaib of Detroit also offered her endorsement for Sanders. And both Sanders and Tlaib honored former Rep. John Conyers of Detroit, who died earlier Sunday.

"When I was elected to Congress in 1990, I wanted to be on committees that had strong progressive leadership and John got me on those committees," Sanders said during his speech. "He was a champion of civil rights and the man most responsible for getting a national holiday for the late Martin Luther King Jr. And long before it was popular, he knew that health care is a human right."

Sanders, who has campaigned against both the Republican party as well as the Democratic establishment, is popular in Michigan. He defeated Clinton in a surprise upset in the state's 2016 primary.

The event staff said the capacity of Cass Tech's gymnasium was 5,000.

You can watch the rally below:

If there ever was a time for millions of people to come together and build a mass movement for justice, now is that time. Join us live from Detroit at our rally with @RashidaTlaib, Jack White, and more: https://t.co/WhhoZXAbup