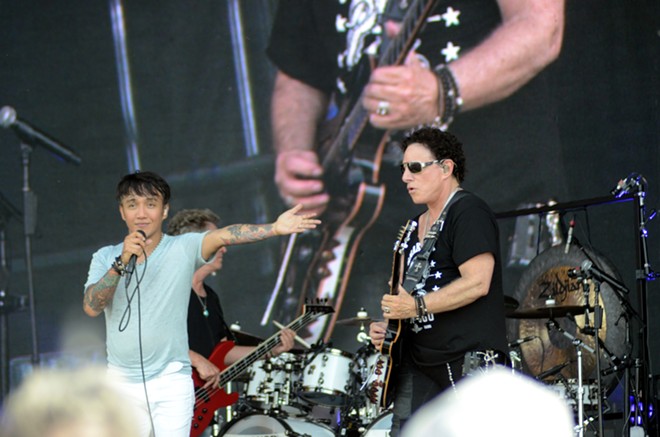 In one of the rock band Journey's most famous songs, 1981's "Don't Stop Believin'," former frontman Steve Perry famously belts "born and raised in South Detroit" — forever establishing the track as a Motor City sports stadium staple and bar closing-time go-to, despite the fact that there is no actual place known as "South Detroit."

Anyway, the band announced a 2020 tour with fellow Rock and Roll Hall of Fame members the Pretenders, and is skipping South Detroit. (Because it is not a real place and does not exist.) The tour does, however, stop at Clarkston's DTE Energy Music Theater on Sunday, July 4. The tour has another Michigan stop at Grand Rapids' Van Andel Arena on Wednesday, July 8.

The band has been fronted by Filipino singer Arnel Pineda since 2007, after the band stumbled on his videos on YouTube following the departure of Perry in the late 1990s due to health issues. The band's 2020 tour is joined by founding member and lead guitarist Neal Schon and co-founding member and bassist Ross Valory, as well as longtime keyboardist Jonathan Cain and drummer Steve Smith.

Previously, Perry told CBC News he made the lyrics "South Detroit" just because it was phonetically pleasing.

"I tried north Detroit, I tried east and west ... but south Detroit sounded so beautiful," he said. "I loved the way it sounded, only to find out later it's actually Canada."

The band has no Windsor date either, however.