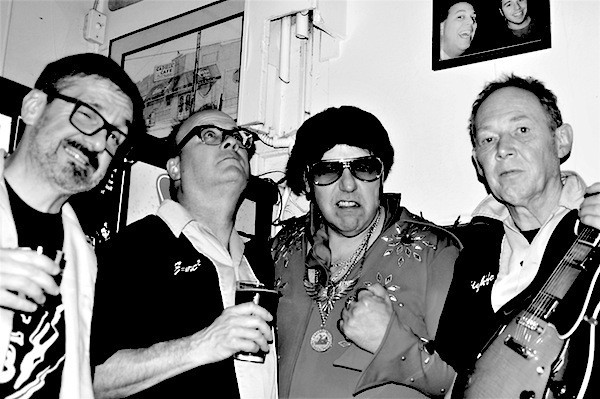 It's been 42 years since Elvis Presley, the "King" of rock 'n' roll, died. And yet, some people still find themselves all shook up — so much so that since his funeral in 1977, people have had very active, suspicious minds and have cooked up wild conspiracy theories alleging Elvis is still alive. One such theory originated in Kalamazoo, a city he performed in, in the months leading up to his death, in which a woman named Louise Welling claims she saw the King at a local supermarket scarfing down Whoppers at a Burger King sometime in 1988. Anyway, one thing is true of Elvis — he lives on through Detroit's ultimate tribute group, Eastside Elvis and the Motor City Mafia. The band, which formed in 2002 after a spirited and costumed karaoke performance, features guitarist Bruce Bryson, Tim Taebel, and Tim Suliman, as well as Paul Misuraca as Elvis-ish.