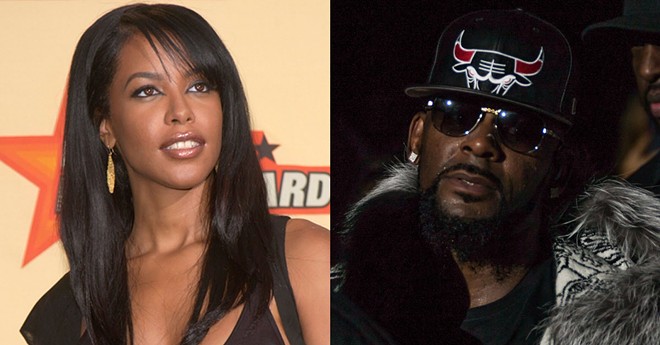 Twenty five years ago, Vibe magazine blew the lid off rumors that singer R. Kelly was romantically involved with his teenaged protégé Aaliyah when it published the couple's Illinois marriage license. At the time, Aaliyah was 15 and Kelly was 27. Since then, it's been a mystery as to how the illegal marriage occurred — until now.

On Thursday, federal prosecutors accused Kelly of bribing an Illinois government employee to obtain a fake ID for Aaliyah that listed her age as 18, according to the The New York Times. The bribe allegedly occurred on Aug. 30, 1994, the day before the marriage license was dated. Prosecutors did not name the government employee or even which agency employed them.

The new charges come from an expanding federal indictment filed in New York against Kelly, which accuses him of recruiting underage fans to have sex with him. Since the indictment is part of a racketeering charge, the crime does not fall outside the typical statute of limitations.

The Lifetime documentary Surviving R. Kelly produced by Detroit filmmaker dream hampton brought renewed interest to Kelly's alleged sexual misconduct, which has long been treated as an open secret in the music industry. Kelly was charged this year in numerous jurisdictions for abusing minors, and is currently in federal custody in Illinois.

As recently as this year, Kelly's lawyer Steven Greenberg claimed on Good Morning America that his client had “no idea” Aaliyah was 15 when they married. But the year before, Kelly produced Aaliyah's cheekily titled Age Ain't Nothin' But a Number.

The marriage was quickly annulled, and Aaliyah never worked with Kelly again. She died in 2001 in a plane crash at 22.

The singer, a graduate of the Detroit High School for the Fine and Performing Arts, is cited as a major influence on R&B. But her music has disappeared from the digital age after her uncle Barry Hankerson's record label, Blackground Records, dissolved.

Earlier this year, however, a Twitter account associated with Hankerson suggested that Aaliyah's music could come to streaming services in 2020.