No, Eminem did not murder Nick Cannon in Detroit

Sometime between late Monday night and Tuesday morning, someone edited comedian, rapper, and Wild 'N Out host Nick Cannon's Wikipedia page to say the 39-year-old had died in Detroit. 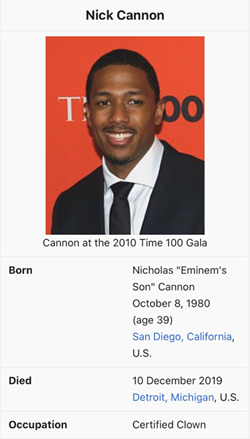 Cannon's page has since been edited back, as Mariah Carey's ex-husband is not physically dead, just dead in the eyes of Eminem stans, who have launched the hashtag #RIPNickCannon into the trending stratosphere after Cannon hurled a diss track at Em Monday night.

On “The Invitation,” Cannon reignited an old beef with the Detroit rapper, which, wait for it, was a response to an even older beef stemming from a decade-old rumor that Em and Carey hooked up, which served as fuel for Eminem's 2009 song “The Warning.” No, really, the whole song is about Cannon and Mariah.

Anyway, last week, Fat Joe and Dre dropped their collaboration featuring Mary J. Blige and Em, “Lord Above,” which finds the Detroit rapper claiming that Carey basically neutered Cannon and calls the “All I Want for Christmas” diva a nutjob.

Cannon's track is aimed at one person and one person only, as it opens with rapper Suge Night explicitly calling Eminem a bitch before Cannon and company take jabs at Em's ex-wife, Kim, and daughter Hailie, as well as take a weak and highly homophobic shot at Em's lifestyle, rapping, “I heard your chauffeur got a video of you suckin' a cock.” The track later goes on to defend ex-wife Carey, “My baby mama killed you off a decade ago, You're still crying about it bitch, now who really the ho?”

Not one to stay quiet, Em responded all too calmly on Twitter.

U mad bro? Stop lying on my dick. I never even had a chauffeur, you bougie f*ck.🤡

And a half an hour later, jokingly demanded an apology from “Nicholas.”

I demand an apology Nicholas, you've made my gardener so jealous!

It didn't take long for Twitter to weigh in, declaring Em — who has yet to issue a formal diss track to the diss track in response to the diss... OK — this is exhausting, but someone has referred to Eminem as the “rap Thanos,” and that is very good content.

#ripnickcannon is trending and people think he died. but turns is that this coward mentioned Eminem family and we all know what happen when someone make this shit
pic.twitter.com/9YL99Zf4DZ

yo twitter just gave me a heart attack with #ripnickcannon trending...ain't nothing wrong with him, he's just an idiot for going after Eminem lmao

Woke up thinking Nick Cannon died.
After 7 seconds of research it turns out he in fact is a dead man. #ripnickcannon pic.twitter.com/XyStKxB3SK

Bruh Eminem could literally respond with this Spanish version and it would still be better than nick’s “diss” lmaoo #ripnickcannon Eres una rata! pic.twitter.com/NkGv7x8DQV


Nick cannon assembled the nigga from wild n out and all that to take on the rap thanos #ripnickcannon pic.twitter.com/BiC988DSzq


In response, The Masked Singer host has been taunting Em with an offer to partake in a rap battle on Wild 'N Out.

@Eminem I see your handlers let you use the internet today Marshall! @mtvwildnout We waiting... ⏳


Even rapper 50 Cent took to his Instagram to defend Em and warn Cannon, calling the comedian's track trash and threatening to kick his ass.

“I don’t understand to save my life why someone would pick a fight with EM,” 50 said in a caption of a photo of Eminem. “He is a different kinda animal, I haven’t seen a motherfucker come close to beating him, man. hey, Nick, that shit was trash, I oughta kick you in yo ass when I see you PUNK!”

Regardless of how this shakes out, Cannon might want to borrow one of The Masked Singer costumes for a bit and sit this one out.