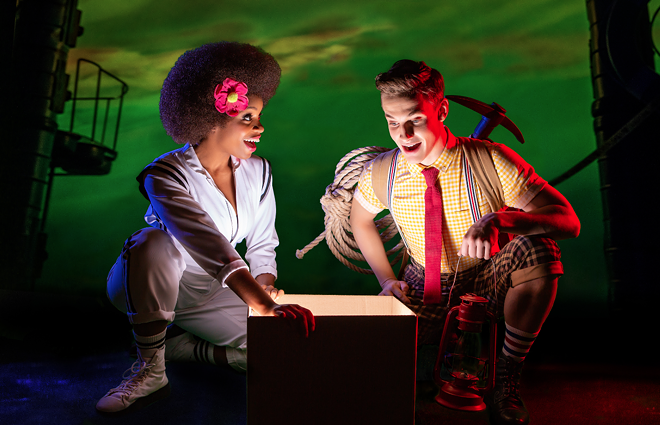 Who would have thought a children’s cartoon about an asexual sponge who famously lives in a pineapple under the sea would have enchanted kids and adults alike for more than 20 years?

Against all odds, Nickelodeon’s subversive, generation-spanning SpongeBob SquarePants floated on, normalized the absurd, and made it cool to have krabs … Krabby Patties, that is. And now, SpongeBob and friends are hitting the stage. In one of the most unexpectedly delightful musical interpretations since Triassic Parq (Google it), The SpongeBob Musical isn’t just a demented curiosity come to fruition — it’s a heavily celebrated, Tony Award-winning production (tying with Mean Girls in 2018 with 12 nominations). The SpongeBob Musical follows SquarePants (who is played by a person and not a person dressed like a sad, campy mall character) as he and his friends attempt to stop Bikini Bottom from sliding into chaos and anarchy after a volcanic eruption threatens the town’s way of life. Along with posing existential quandaries, there’s pirates, roller skates, intrigue, Powerpoint presentations, post-punk-infused numbers about despair, and plenty of weird fish people. Oh, and Gary. (Meow!)