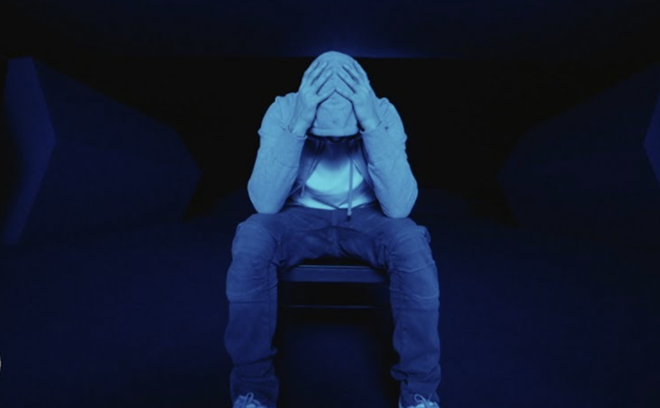 Guess who's back? Eminem returned with another surprise album drop on Friday with Music to Be Murdered By, which finds the rapper once again wading into controversial politics.

At the center of the record is the Simon & Garfunkel-sampling "Darkness" — a six-minute track that puts Em into the shoes of Stephen Paddock, the perpetrator of the 2017 Las Vegas massacre, which was the deadliest mass shooting by an individual in U.S. history. The accompanying video portrays a drugged-up Paddock in his hotel room overlooking a music festival before he opens fire on the crowd and eventually kills himself.

"You'll never find a motive, truth is I have no idea," Eminem raps in the closing bars. "I am just as stumped, no signs of mental illness/ Just tryin' to show ya the reason why we're so fucked/ 'Cause by the time it's over, won't make the slightest difference."

The video ends with an appeal for gun-law reform: "When will this end?" a title card reads. "When enough people care." The video also has a link to vote.gov, and Em's website has a link to more gun-reform resources and organizations at eminem.com/darkness.


Some listeners, however, are taking issue with lyrics on another track that makes light of another act of terrorism at a concert. On "Unaccommodating," Eminem references the 2017 Manchester Arena bombing at an Ariana Grande concert as a way of boasting about his hip-hop prowess: "I'm contemplating yelling 'bombs away' on the game/ Like I'm outside of an Ariana Grande concert waiting."

Figen Murray, whose son Martyn Hett died in the attack, took to Twitter to disapprove of the song.

"Feels like he is piggybacking on the fame of Ariana Grande and Justin Bieber and says distasteful things about other celebrities," she tweeted. "Not clever. Totally pointless. And before all Eminem fans pounce on me, I am not interested and will not engage."

Forbes was even more blunt, writing, "Do you get it? Because Em’s gonna totally kill the rap game, bro! And if he has to trivialize one of the deadliest terrorist attacks in London history or poke fun at the trauma of a 26-year-old woman to do it, so be it!"

Of course, Eminem has long made a career out of generating controversy and boundary-crossing. (The album artwork for Music to Be Murdered By features his Slim Shady moniker, which he's long used to rap about violent fantasies.) And to be fair, in the wake of the Manchester attack, Eminem did ask his fans to donate to the victims' families, raising more than $2 million.

The somber "Darkness" video calls to mind Em's 2017 anti-Donald Trump freestyle diss track that he unleashed during the BET Awards in which he told Trump supporters, "Fuck you."

Later, in an interview with MTV's Sway, Eminem expressed regret for attacking Trump voters. "I realized after it was all said and done that maybe I should have just attacked him," he said. On "The Ringer" from his 2018 surprise drop Kamikaze, Em rapped, "But if I could go back, I'd at least reword it/ And say I empathize with the people this evil serpent/ Sold the dream to that he's deserted."