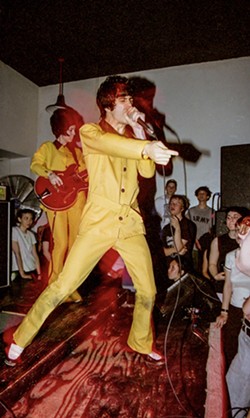 The beauty of the Third Man Records Cass Corridor location is that it serves as a perfect homecoming location for a lot of the city’s great musicians and artists. Most everyone knows that the White Stripes and Negative Approach cut their teeth in the neighborhood.

But Third Man also serves as a perfect homecoming venue for a lot of great bands who frequented the underground venues in the neighborhood when downtown felt like a ghost town. That’s why it’s a no-brainer that ’90s Washington, D.C., post-punk legends The Make-Up are playing Third Man Records this Friday with Shadow Show.

The Make-Up formed in 1995 from the ashes of Dischord Records’ Nation of Ulysses — a band every bit as incendiary live as labelmates Fugazi.

In The Make-Up, NOU’s vocalist Ian Svenonius, guitarist James Canty, and drummer Steve Gamboa were joined by Michelle Mae on bass. On record the band mixed gospel, James Brown, garage, French ’60s pop (yé-yé), and post-punk that was combined with a live fourth wall-smashing performance ethos. This is all an incredibly academic way of saying that live the band was fun as fuck and stylish as hell (in matching outfits), with vocalist Svenonius spending large chunks of the show in the crowd.

The band parted ways in 2000 after four albums and a singles compilation. Svenonius kept up a prolific musical output with bands Chain and the Gang, Scene Creamers, Weird War, and his solo project Escape-Ism. He’s also the author of three books (all recently released as audiobooks with Svenonius reading) including the essential read Supernatural Strategies for Making a Rock ’n’ Roll Group, which (like all his writing) manages to imbue cultural critique with a good sense of humor. Mae continued to play with Svenonius in Weird War as well as with Ex Hex. Canty plays guitar with Ted Leo.

The Make-Up first reunited in 2012 for the All Tomorrow’s Parties and Coachella festivals in 2013. They did some short tours with new drummer Mark Cisneros in 2017 and last year. So the chance to catch them in Detroit again for the first time in 20 years is a rare and overdue opportunity not to be missed.

The Make-Up played packed Detroit shows at Zoot’s Coffee House (kitty corner from TMR), The Magic Stick, and CAID back in the late ’90s. Even though their label Dischord had strong ties to Detroit through the early ’80s hardcore scene, The Make-Up built up their own connection to Detroit.

"We just started going to Detroit all the time and it was just such a happening place," Recalls Svenonius. "It was weirdly isolated in a cultural way (yet there was) a really distinct music culture. On the west side, Ann Arbor had that avant garde tendency, and then mixed with this Detroit pop thing as typified by soul music, Detroit just had this really special thing happening. Detroit has always been this incredible hotbed of creativity."

After The Make-Up breakup, Svenonius’ Detroit connection has been ongoing. He’s recorded and/or toured with Fred Thomas, Shelly Salant, Danny Kroha, and Ben Collins. His upcoming Escape-Ism album is being recorded in Michigan. Escape-Ism also has a feature film in the works that Third Man is helping to produce, and parts of it were filmed at the Third Man Pressing Plant.

The film collaboration is no surprise given Svenonius and Third Man’s history. "They're just old pals, like Dave Buick. Ben Swank is an old pal. Ben Blackwell played drums for a Weird War tour," he says. "The institution is riddled with friends and compatriots and collaborators. So it just is a natural thing, I had a good time playing there before. Escape-Ism has a live 45 that we made on that stage. And The Chain and the Gang recorded a live album at the Nashville Third Man.”

Given that history and the proximity to Zoot’s, it only makes sense for The Make-Up to return to Detroit at Third Man. In spite of 20 years passing since their heyday, Svenonius doesn’t seem likely to rein in his performance aesthetic any time soon. "I think every group just has its performance style that's based on the gestalt of the group," he says. "You react and perform to the music in a way that is almost outside of your control. It's almost like you have no choice."

As for future Make-Up plans beyond shows, there are no concrete recording plans — but Svenonius won’t rule it out either. "We have a vague plan to record something," he says. "But it should only happen if it feels right. Only if we create some music that feels authentically Make-upy — meaning an expression of people in the group. We can make a great record. We've got this incredible drummer now who plays every single instrument and then Michelle and James just play in a very particular way together. It would be really fun to record with them. We'll see what happens."

As we wind up the phone call which also touched on gentrification, the coronavirus, and the modern state of/place of music, I asked Svenonius if there are any Detroit musicians that he would want to record with that he hasn’t yet.

"I’ve always wanted to make a record with Matt Smith," of Outrageous Cherry, he says. "We’ve talked about it but haven’t gotten around to it."