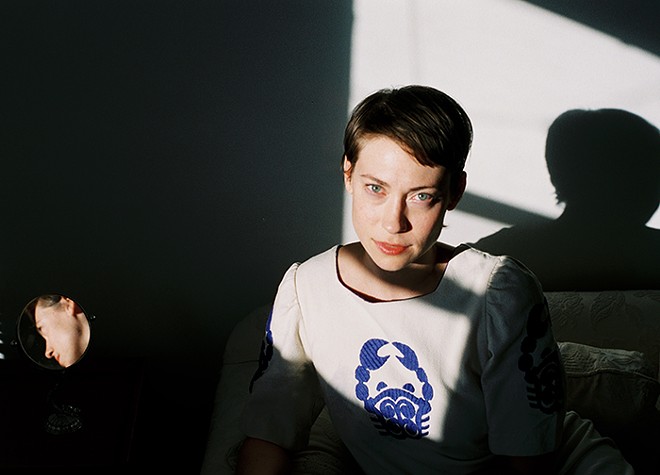 Anna Burch appears to have gotten her wish.

“Do we have to go?/ Could we just stay home?/ 'Cause I'm so tired/ I'm so tired,” Burch pleads on “Party's Over,” the second single from her latest record, If You're Dreaming, out now on Polyvinyl.

Where Burch's 2018 debut Quit the Curse presented a shimmering lo-fi landscape of romantic misadventures laced with frustration, mixed signals, and unreciprocated devotion, If You're Dreaming is a sleepless night spent tiptoeing, sipping tea, and imagining a world in which everything is forced to slow down. A step toward meditative melancholy, If You're Dreaming is Burch at her most awake.

“I mean aside from like the really heavy shit that is going on outside of my apartment, I feel I pretty, pretty safe, pretty comfortable and like pretty grateful to be quarantining with my boyfriend and my cat,” she says. While artists are being advised to shelve their records in the age of coronavirus, Burch's sophomore release persists — though she admits releasing a record at a time when we are asked to stay inside of our homes is a bit strange.

“I'm not going to be able to play songs for people and really feel that kind of exchange,” she says. “I do kind of feel like, in a weird way, [the climate] gives the record more of its own place, if that makes any sense.”

The idea of place just so happens to be a vital component of the record, as Burch found herself grasping for stability following a grueling tour in support of her debut record that lasted a bit longer than she had anticipated.

“I was kind of not taking care of myself,” she says of life on the road.

Following the tour, Burch came home to what she refers to as “a lot of chaos” in terms of housing situations, and, at one point, found herself being robbed at gunpoint. She says it wasn't until she found herself in a more stable arrangement that she began to settle in and down, which allowed her to finish working on the record. Burch says you may be able to detect a mood shift during the last half of the If You're Dreaming, the bulk of which was written and composed in her current environment, her apartment. (During this interview, which she conducted from her balcony, birds can be heard singing, painting Burch like some sort of lo-fi Snow White.)


The serenity that envelops the record is also a postcard from the album's recording session, done over a two week period in the Catskills. Burch enlisted drummer Matt Rickle and producer and multi-instrumentalist Sam Evian, whose Catskills studio the trio holed themselves in.

“It was just so nice like being in the Catskills and you know, having dinner together, playing cards and going for walks,” she says. “It was just such a nice environment. And I think it really lent itself to a more mellow record.”

If You're Dreaming, though sparse and tranquil, is a lesson in restraint. Burch hasn't necessarily abandoned the upbeat, high-energy from Quit the Curse, a record she says was the result of wanting to be heard. Those elements take a backseat to Burch's ability to make rock songs that are rooted in weariness and fear by weaving them into cascading declarations of acceptance, each one maintaining the same calming energy as waves lapping the shore or one of those clock radios that makes a bunch of sounds aimed for relaxation. Burch's interpretation of stillness still rocks.

Despite the title, Burch doesn't put too much stock into the material of her dreams, unless it happens to fit symbolically into what she may be going through, which is why the record is more inspired by the lack of sleep rather than what happens behind our eyes when we are asleep.

“Most of the lyrics about sleep and about dreaming came from insomnia,” she says. “So I was having a really hard time sleeping and the person I'm in a relationship with is very good at sleeping. I think that kind of dynamic fed into a lot of those lyrics and the kind of like need for rest.”

When it is suggested that music made in the age of coronavirus will hold a special place in time, she jokes that hopefully, we can revisit If You're Dreaming without “too much PTSD.”

“I'm looking forward to writing a bit once I feel kind of like, things aren't spinning so fast,” she says.

If You're Dreaming is out on Polyvinyl.