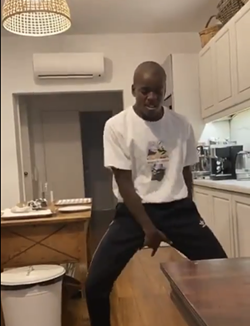 We suspect Madonna is having a rough morning.

But now social media is skewering the diva after she posted a video Thursday night, in which her son David Banda performed a dance to alleged pedophile Michael Jackson's “They Don't Care About Us” to “honor” George Floyd, the unarmed Black man murdered by Minneapolis police earlier this week, which has fueled days of nationwide civil unrest.

“Brutal murder travels around the world my son David Dances to honor and pay tribute to George and His Family and all Acts of Racism and Discrimination that happen on a daily basis in America,” the post reads, with attached hashtags #davidbanda #JusticeforGeorgeFloyd #MichaelJackson.

Needless to say, it's not going well.

Brutal murder travels around the world my son David Dances to honor and pay tribute to George and His Family and all Acts of Racism and Discrimination that happen on a daily basis in America. #davidbanda #JusticeforGeorgeFloyd #MichaelJackson pic.twitter.com/wLa6YKrYF1


Twitter took to calling the post “tone-deaf” and on par with that 2017 Pepsi commercial starring model Kendall Jenner where she basically ends police brutality by making nice with armed cops at a protest by handing them a frosty can of Pepsi. (Or so PepsiCo would have us believe.)

This is worse than that Pepsi can.


Others criticized the 61-year-old pop star's decision to make her adopted Black son “dance” for the Black community to make a statement on her behalf. Several users went as far as to dub the video over with a song about “shuckin' and jivin'” to highlight the many racially insensitive undertones of Madonna's tribute.

Retired NBA player Rex Chapman said Madonna's tweet might be “the worst of all time,” adding “‘come dance in the kitchen for racism’ is a weird take. To Michael Jackson? And other things.”

Nobody asked Madonna to weigh in today. Not a soul.

Unforced errors among public figures have been rampant this month. pic.twitter.com/DNOkNCG7at

Good intentions but completely tone deaf. Dancing away the racism of murderous cops won’t actually do anything. But thanks for trying!

What in the wide worlds of fucks did you post and why?

The problem with madonna is that she is very tone deaf, unfortunately. This is why folk keep side eyeing her posts. pic.twitter.com/bAG5tRjSRo


Madonna's follower's on Instagram, however, appear to be less critical. Like, way less. In fact, most of the comments on the same video appear to praise Madonna's expert parenting and for using her voice, calling the statement “powerful” and “moving,” with a flood of heart emojis and hashtags in honor of Floyd and also the king of pop, for some reason. Oh, and people seem to really like her kitchen, where the video appears to be filmed.

“Goosebumps alllllllllll ober me! I feeeeeel thissssssssssss,” one fan wrote.

“Thank U for speaking about this, Madonna. Your voice reaches many and helps to raise global awareness of the injustice going on in the US,” another comment reads.

“David is dancing to the beat of our ancestors who have died fighting racism..keep expressing yourself for equality. #blacklivesmatter,” said another.

An emotional fan said the video brought tears to their eyes, adding “thank you for sharing this and also stooding up for Michael as well.”

And apparently MJ conspiracy theorists showed up, too.

“Dance for MJ too because the same govt killed him for the messages in his music which was a warning about 1 world govt,” one user wrote.

Before the dance, Madonna had posted a video of Floyd addressing gun violence as well as the unbelievable video of Floyd's gruesome murder, which Madonna captioned with “Fuck The Police!”

Recently, Madonna unknowingly courted controversy by calling the coronavirus — which has killed 100,000 Americans since March — “the great equalizer” while bathing in a luxurious tub filled with rose petals. Earlier this month, Madonna also claims to have been tested positive for coronavirus antibodies, after which she said she was going to “breathe in the COVID-19 air.”