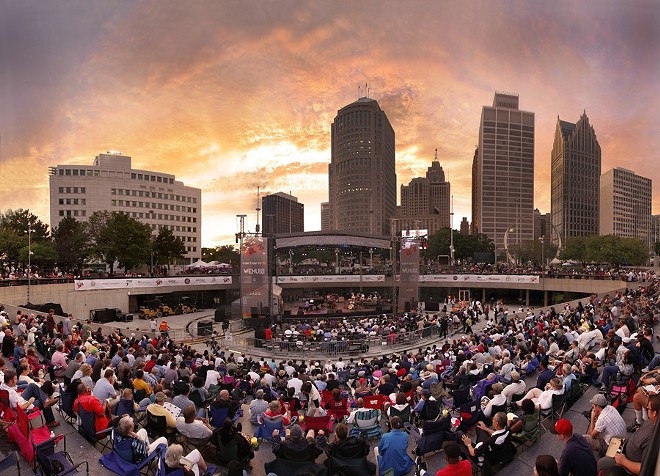 Last month, organizers of the 41st Jazz Fest said that the show would go on as planned during its traditional Labor Day weekend slot, albeit with a revised format. But on Wednesday afternoon organizers said that the festival will instead move forward with an audience-less live virtual/radio broadcast format due to, well, you know.

According to a press release, the event, which will take place Sept. 4-7, will move its performances to indoor sound stages at the Detroit Marriott at the Renaissance Center, rather than Hart Plaza, where the event normally takes place. Performances will be closed to the public but can be streamed on the festival's website and phone app, as well as across public radio and television stations. The production quality of the televised performances aims to “duplicate the live experience” and will be shot from various angles in HD. Continuous live performances will be streamed for 8-10 hours per day.

While the virtual remains free, as the live version has been for years pre-COVID-19, the 2020 lineup has ultimately been scrapped — including 2020's artist in residence, Dee Dee Bridgewater — so as to limit unnecessary travel for artists and crews. Instead, the new format will focus on local artists.

The new lineup will be announced at a later date, and metro Detroit-based jazz artists are invited to apply to be a scheduled performer for this year's event via DetroitJazzFest.org.

Jazz Fest is the latest widely-attended event that has been forced to modify its celebration. In June, Detroit's Concert of Colors revealed that it would pivot to a broadcast format in October, while Hamtramck's annual Labor Day Festival made the decision in May that it would cancel 2020's festivities. As of right now, Royal Oak Labor Day mainstay, Arts, Beats, & Eats is still on, as is Detroit's Movement Music Festival, which was moved from Memorial Day to Sept. 11-13.