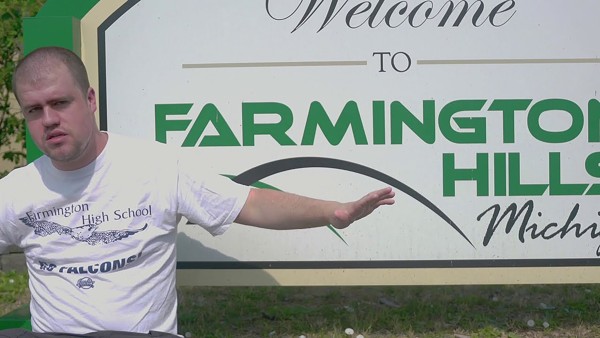 On Monday, a new video from a local rapper named Clooner went viral, especially among my friends who also grew up in the deeply uncool Detroit suburbs of Farmington and Farmington Hills.

Calling himself "The King of Farmington," Clooner — dressed in an FHS T-shirt, cargo shorts, and Crocs (with socks) — name-drops a number of locales, including the Silver Dairy ice cream stand, Chicken King, and Plus Skateboarding, among others.

"Everyone's fighting for the title in the D/ Farmington was up for the taking/ And I took it," he raps.

But it's not just a hit with people from Clooner's hometown. The track even got an endorsement from no less than Detroit rapper Danny Brown, who wrote on Twitter, "This actually slaps!!"

It's not the first time Clooner, real name Matt Cloonan, has had viral success. After graduating from high school in 2013, Clooner also scored an internet hit on Reddit with "I Don't Get Pussy" in 2015, thanks to the hilarious juxtaposition of Clooner's growl paired with his dorky style and self-deprecating lyrics.

But even though it's only been out for one day, the video for "King of Farmington" has already far surpassed his expectations.

"I mean, this hasn't hit 10,000, but this definitely like has reached way further than I could have imagined," he says. "It's funny because Lord of the Outsiders, who did the video, he sent me the video Sunday, and he was like, 'Hey man, I'm not really excited about this video. You know, I think it's one of our worst ones.'"

The beat is by producer Luke Superior. "He's also from Farmington, but he's in Atlanta right now," Clooner says.

Clooner says instantly, he started getting comments on social media from people who accused him of forgetting other notable local references.

Clooner says he's also amused at how the track has sparked a debate on social media over otherwise nonexistent divisions between the smaller city of Farmington and the larger Farmington Hills which surrounds it.

"I've seen a lot of divide in Twitter comments about like, 'Oh, he's singing about Farmington, but why is he in front of a Farmington Hills sign?" he says. "There's almost a fight going on between Farmington and Farmington Hills. And it's just ridiculous."

Even Farmington Hills Mayor Vicki Barnett weighed in on it, writing on Twitter, "I just can’t explain why someone would sit in front of a FH sign and sing about Farmington unless they clearly recognize that our signs are much prettier."

Clooner says, technically, he's rapping about both cities. "I should have almost sung 'comma, Farmington Hills,'" he says.

Another name-drop Clooner makes is someone named Chad Hoffman. Is he the next big rapper from his city? "No, he's just an outgoing guy," Clooner says. "If you meet him, you're gonna know him."

Beyond the hyperlocal references, Clooner says the song works because anyone from a small city can relate to it.

Clooner says the track should be dropping on streaming services by the end of the week. You can follow him on YouTube here and Instagram here.

Below, enjoy the video for "King of Farmington."