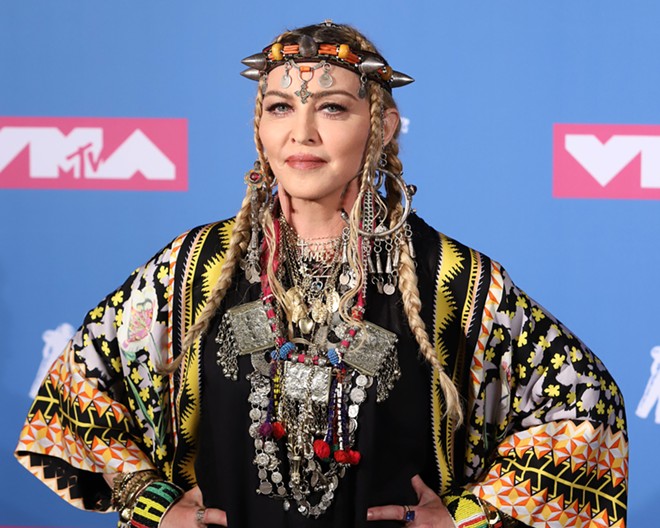 The provocative pop star Madonna has once again been censored — this time for sharing a debunked viral video on her Instagram account.

On Tuesday, Madonna shared a viral video of Houston doctor Stella Immanuel, who claims that the drug hydroxychloroquine is a proven cure for COVID-19.

"They would rather let fear control the people and let the rich get richer and the poor get poorer," Madonna wrote in the video's caption, while also calling Immanuel her "hero."

But the drug has not yet been scientifically proven to cure the coronavirus, and the video has been removed from social media platforms including Instagram, YouTube, and Facebook. Twitter temporarily suspended Donald Trump Jr. for sharing the video, which has gone viral in right-wing circles.

Instagram soon censored Madonna's post, blurring it out and marking it as "false information" flagged by independent fact-checkers. The app also provided a link to a page that debunks the claims in the video.

Eurythmics singer Annie Lennox even scolded Madonna in the comments for sharing false information. "This is utter madness!!!" she wrote. "I can't believe that you are endorsing this dangerous quackery. Hopefully your site has been hacked and you’re just about to explain it."

President Donald Trump has repeatedly pushed hydroxychloroquine as a coronavirus cure, claiming that the mainstream media and scientists are suppressing information about the drug for "political reasons (me!)". However, a number high-profile studies of the drug to treat COVID-19 were abruptly halted after patients were found to be more likely to suffer cardiac side effects. The FDA revoked its emergency use authorization of the drug to treat COVID-19 in June.

Detroit's Henry Ford Health System has been involved in one of the largest-scale studies of the drug as a COVID-19 preventive measure, it caused confusion when it released the results of a different study that found that the drug lowered the death rate in patients. Though Trump claimed the study vindicated him, critics accused the health system of skewing the results by carefully selecting who received the treatment. Randomized, double-blind trials are considered the "gold standard" for scientific studies.

The results of Henry Ford Health System's double-blind study of the drug as a preventive measure have not yet been released.

For some reason, Trump and his followers would rather take hydroxychloroquine than simply wear a mask, which have been proven to be helpful in slowing down the spread of the virus. Trump has refused to be photographed wearing a mask for months.

"This virus has a cure: It’s called hydroxychloroquine, zinc, and Zithromax," Immanuel says in the video. "You don't need masks. There is a cure."