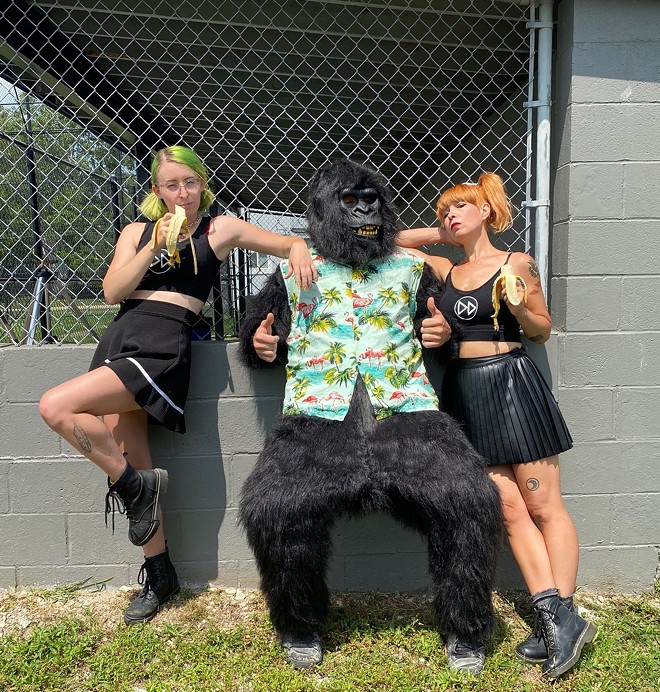 Stacey MacLeod thinks her bedroom punk outfit of seven years might be better off dead.

“I'm the bleak bastard who says 'I'll be a famous dead woman.' I'm partially joking, but times have changed since I started playing in bands in the '90s,” she says. “Back then, there was the fantasy that the man from Sub Pop was gonna roll up during your gig. He's smokin' a big cigar. You get signed and make some records. That's not the way it works these days.”

As a result of the pandemic, MacLeod was laid off as an English teacher at Macomb Community College, a job she's had for 14 years. It also upended Dear Darkness' live performances and a recording session with garage rock producer Jim Diamond for their latest EP, which was canceled in March. She says the pandemic hasn't stopped her journey of personal growth as she's been taking a deep hard look at what she can do to heal some of her internal damage due to years of what she calls “limiting behaviors” like drinking and poor self-talk.

“Oh man, at one point I was sorrowful, because for a while there, it seemed like all dreams were called-off,” she says. “I missed seeing smiles, I still do. But I tend towards optimism and I've felt mostly stable in knowing that the world is innately well.”

She hasn't let the pandemic snuff out Dear Darkness, either, regardless of how posthumously famous they might be in the afterlife.

During the last few months, MacLeod has been rehearsing with married duo Michelle Thibodeau — whom MacLeod refers to as “little Danzing” — and Cassidy Stewart, both of whom hold membership in another band, The Cult of SpaceSkull. Stewart, however, was a late addition to the band as bassist and, to maintain the fierce-femme spirit of Dear Darkness, they put him in a gorilla suit. She jokes that this decision was an “organic” one.

And then came some guerrilla-style rehearsing. MacLeod says once they could reschedule a recording date, they started rehearsing in the middle of nowhere to stay safe and polished.

“[We] rehearsed our asses off, which is probably why there is such immediacy to the tracks,” she says. “We had little else to live for at the time.”

Thus, Dear Darkness' self-titled four-song 7-inch EP was born. Pressed by Third Man Records, the EP is described by the band as sounding like what would happen if “the Slits covered 'The Monster Mash' with surfy pop guitars” with a hint of “drinkin' a bunch of booze and fightin' with your old man who ya love a bunch.”

For their latest offering, Dear Darkness serves a bold and soul-purging petit four that is as fitting for stir-crazy quarantining or pre-virus raging at your favorite packed beyond-capacity Hamtramck venue, not giving a shit if you puke on your own shoes, but hoping you look cute when you do.

Though the EP is keeping with Dear Darkness' tradition of warped distressed to impress bedroom punk energy, MacLeod says she turned away from her past inspiration of in-your-face male gaze-oriented lyrics to, well, a hot and heavy relationship. On “Liquor Store,” MacLeod writes about taking her old man to the liquor store to buy more booze and then recalls one time having driven away, leaving him there. On “Let's Go,” MacLeod wants to ditch the gig to hang with her dude.

“Early in Dear Darkness, though, all of my songs were highly predatory, kind of turning the tables on dudes, like 'You Ain't Tried It With Me' and 'Yeah, I Seen Ya Round,' which were all about me being on the prowl, while out seeing bands,” she says.

She knows, especially nearly a decade into it, that Dear Darkness may not be suitable for everyone's tastes. And that's including her voice, which she says isn't always intended to sound “pretty.” For MacLeod, it's about confidence and connecting with what she's written through her voice in a way that feels authentic to what she is trying to convey in the song. “Over the years I have really learned to indulge myself by feeling my voice come out, seems like a weird thing to say,” she says. “I have complete confidence in my singing, That might sound arrogant, but I'm so secure with it that I don't care if anyone dislikes it. I know my voice is not for everyone.”

In the same way that her voice and style may not be for everyone, the music is, in fact, available to anyone who connects with it. She says she didn't intend on making a band focused on a “feminist agenda” despite loving bands that do, and despite MacLeod herself identifying as a feminist. But, in that space of female musicianship and expression, she says she thinks there can still be a space for female-driven music that's just “fun and superficial, about partying and cute dates.” More importantly, she says, Dear Darkness comes from her “essence” with “zero intention.”

“My words aren't about fighting the patriarchy,” she says. “But I perform without giving two-shits about what men think of me and never pander to expectations of what female music should sound like and this is my own form of championing power for women.”

You can listen to Dear Darkness via Bandcamp, where you can also order the vinyl due out on Sep. 12.