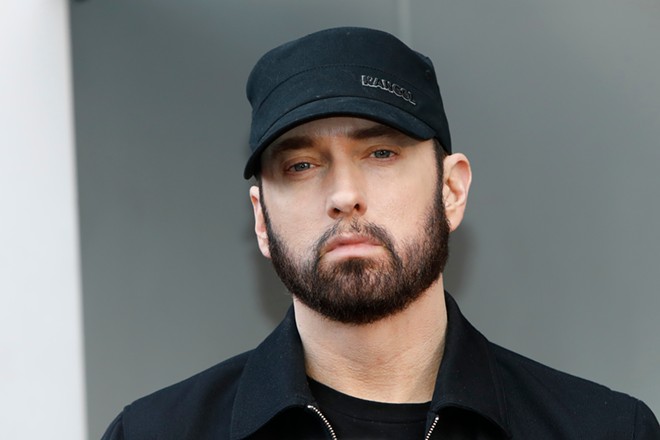 The real Slim Shady stood up for Democratic presidential candidate Joe Biden in a new ad featuring his Academy Award-winning 2002 banger “Lose Yourself” as a final push to highlight the importance of America's “one shot” to get Donald Trump out of the White House.

The black-and-white ad released Monday marks the first time Eminem, the 48-year-old “Rap God,” has licensed his music for a political candidate — let alone the “jewel in the crown” of his expansive catalog, which is how a judge described the song during a 2017 lawsuit against a soundalike track used by New Zealand's center-right National Party.

Channeling the power of “Lose Yourself” and its lyrics, the 45-second ad focuses on encouraging voter turnout on Tuesday, Nov. 3, and uses footage of masked voters in line, basketball courts, athletes, aerial views of Detroit, Biden rallies, and dramatic slow-motion shots of Biden walking, which looks pretty badass. Like, imagine a slow-motion Trump? That is the stuff of nightmares.

Eminem has been anti-Trump since before it was socially acceptable to swear off Trump-voting family members, friends, and fans. During the 2017 BET Awards, Eminem performed a freestyle from a Detroit parking garage. The song, later titled “The Storm,” took aim at Trump and his supporters:

“And any fan of mine who's a supporter of his/
I'm drawing in the sand a line, you're either for or against/
And if you can't decide who you like more and you're split/
On who you should stand beside, I'll do it for you with this:
Fuck you!
The rest of America, stand up!
We love our military, and we love our country/
But we fucking hate Trump!”


Following the blistering freestyle, Trump sent the Secret Service to question Eminem, an experience he detailed on 2018's “The Ringer” and later in an MTV News interview.

“They came to my studio, yeah,” Eminem said. “They were just basically asking me questions about my lyrics to see ... what the intent was behind them, and to see if I was making an actual threat or just expressing myself.”

Though he doubled down on his hatred of Trump during the interview, he admits some remorse for attacking Trump supporters, which he also expressed on “The Ringer.”

“But if I could go back, I'd at least reword it/ And say I empathize with the people this evil serpent/ Sold the dream to that he's deserted.”

Eminem's Biden ad comes just days after rapper Lil Wayne found himself in hot water when he shared a photo of himself standing beside Trump —maskless, we might add — offering his support of the president's “Platinum Plan” and touted his “criminal reform” record. Um, what now?

Just had a great meeting with @realdonaldtrump @potus besides what he’s done so far with criminal reform, the platinum plan is going to give the community real ownership. He listened to what we had to say today and assured he will and can get it done. 🤙🏾 pic.twitter.com/Q9c5k1yMWf


Rapper and actor Ice Cube, who earlier this year faced backlash after posting what was perceived as anti-semitic conspiracy theories on Twitter, was also dragged for collaborating with Trump last month on the aforementioned Black Economic Empowerment “Platinum Plan” aimed at pumping $500 billion into helping Black communities. The package will also declare and prosecute the Ku Klux Klan and Antifa as terrorist organizations and will make Juneteenth a federal holiday.

However, rapper 50 Cent — who lost his shit last month over what turned out to be misinformation regarding Biden's tax plan, declaring “I don't care [if] Trump doesn't like black people 62% are you out of ya fucking mind” on Instagram — has since walked back his endorsement.

Last week he tweeted a video of his ex-girlfriend, Chelsea Handler, on The Tonight Show with Jimmy Fallon in which they poked fun at the rapper's endorsement.

“Fu*k Donald Trump, I never liked him,” 50 tweeted. “For all I know he had me set up and had my friend Angel Fernandez killed but that’s history. LOL”

Watch “One Opportunity” below. Oh, and vote.