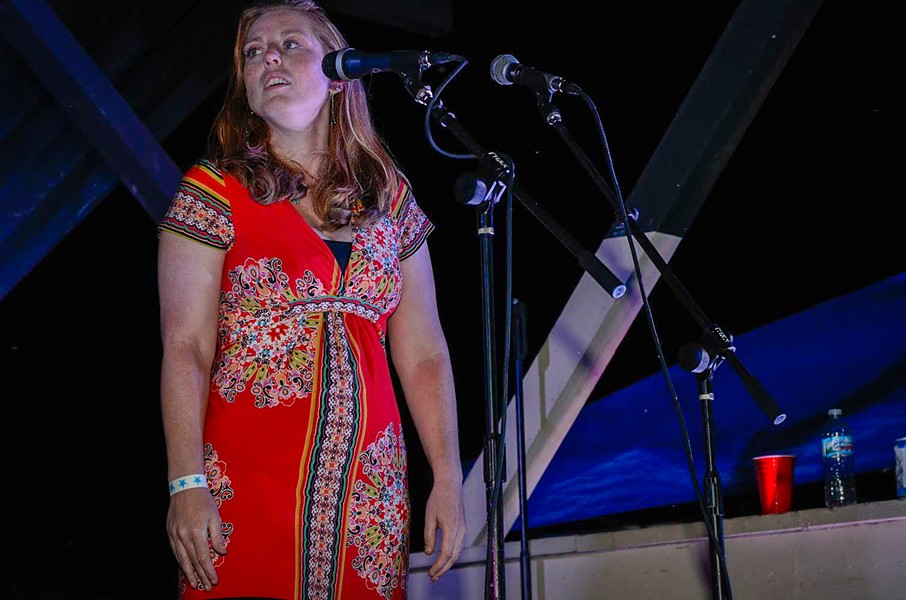 Kelly Corrigan was the best harmony singer I’ve ever heard. She came to prominence in the Detroit music scene singing backup for Alison Lewis and later Ty Stone, wending her way into the rough-around-the-edges Inside Outlaws Music Collective in River Rouge on the merits of her inimitable voice.


Fans of Americana music often speak of “blood harmonies,” those crystalline singing arrangements that only siblings could possibly produce. And while they weren’t related by blood, Kelly Corrigan and Alison Lewis were sisters. When they sang together, it was joyous — beautiful even. Many nights at the Ghost Light in Hamtramck or at the Lager House in Corktown, Kelly’s harmonies set to Alison’s songs stopped the show, made it nearly impossible for anyone else to follow (believe me, I had to play after them one night at Lager).


That whole Downriver Inside Outlaw crew has grit and swagger, but Kelly was always quiet and humble, as if unaware of how gifted she was. She cherished singing friends’ songs, though, and when she lent her voice to a number, you didn’t forget it.


Alison Lewis’ “Our Lady of the Highway” comes to mind as one Kelly left her indelible stamp upon: Our Lady of the Highway watch over me tonight … Kelly’s quiet but stunning approach, the chills and surprise you felt when you heard her accompanying her friends are what led Don “Doop” Duprie to dub her “The Assassin.”

You didn’t see her coming, this unassuming, skinny, red-headed virtuoso, but after she sang you could never quite hear the song without her again. None of us who had the benefit of her accompaniment and friendship will ever hear our songs without the ghost of those harmonies.


Kelly Corrigan, as you probably guessed, was Irish. Five years ago, when she and Alison were the featured guests at my songwriter night at the Gaelic League in Corktown, she told me how much she loved the place, that she wanted to learn some Irish songs so she could sing them with my band The Codgers.

“Wild Mountain Thyme” became a favorite. Kelly and I would sing it together anytime she and Pat Vadnais, her longtime boyfriend and a phenomenal songwriter and producer in his own right, would show up to a Codgers show. It’s one I don’t think I can do anymore.

Will ye go, Lassy, go, and we’ll all go together …


At some point a few years ago, Kelly got really sick. Cancer. She went through grueling chemotherapy treatments. She lost her appetite and her hair. She grew pale and thin. You’d think someone would quit at that point, but Kelly kept coming out, playing shows with her dear friends Alison and Matt Dmits. She was skin and bones, a knit hat pulled tight to her bald head. I’m sure she felt like hell, but the voice was there, stronger than ever, ensouling every song. And there was still that smile, that joy, knowing that she was a key part of what made that scene go.


Everybody who knows Detroit Americana knows that Kelly’s voice was special (is special; it still exists), that her very presence could validate a song you’d written, that it was the difference between the merely well-crafted tune and the great one. But a couple of years ago when Nashville singer-songwriter and The Voice finalist Sarah Potenza came to town to do a house show at Doop’s place, we got objective confirmation of this greatness.

Sarah arranged some vocal parts with Kelly on Doop’s front porch that afternoon, and during her show that night, she kept calling Kelly up for tunes like “Chainbreaker” and “The Mountain.” After they played “The Mountain” and Kelly aced the harmony part, Sarah, an imposing talent not prone to doling out casual compliments, turned to Kelly and said, “Girl, I pay good money to Nashville session singers for backing vocals that aren’t half that good. You have no idea.”


And that’s true. Unless you were fortunate enough to hear Kelly Corrigan sing, you have no idea what we’ve all just lost.

John Freeman is an award-winning poet and author and lead singer of the Celtic folk ensemble The Codgers.