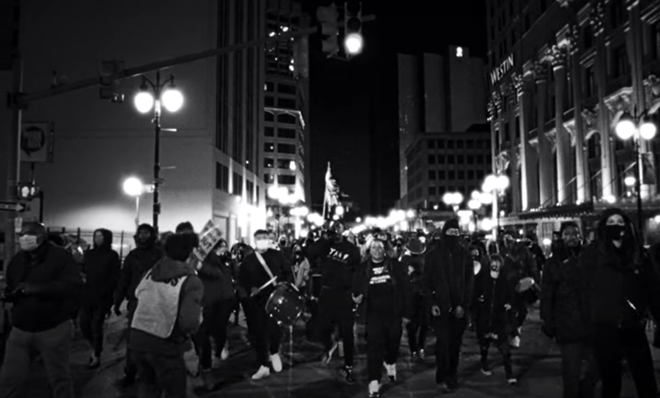 The latest collaboration from Detroit techno great Kevin Saunderson is not a protest anthem as much as it is a heart-pumping celebration of the Black Lives Matter Movement, activism, unity, and a dogged Detroit-based activist group.

The video for “We All Move Together,” which debuted on Friday, features spoken word-style vocals by actor Idris Elba and shines a light on Detroit Will Breathe, the local activist group which formed as a response to the death of George Floyd, the unarmed Black man who was slain by Minneapolis police officers in May. The group marched for more than 100 days following his death demanding racial justice, police reform, and transparency.

“You could be anywhere in the globe tonight, we salute your soul because you chose light,” Elba chants.

Saunderson's Inner City teamed up with Elba for the track and Detroit's Eightfold Collective for the accompanying black and white video, The Detroit News reports. The visual, which was filmed during the summer, features Detroit Will Breathe marches and follows one woman who is compelled to leave her apartment and join the movement after watching a video of police violently targeting a Black man.

“With the challenges in Michigan, the US, and further afield, specific to what we are facing with the BLM movement, we deeply felt that we wanted to release a culturally significant and impactful video that not only embodies the message of the track, but that also directly benefits the Detroit Will Breathe individuals and collectives on the frontline of the movement in our city,” Inner City shared in a statement. “Our platforms can shine global light on the amazing work they do, and it takes the message of the track to an even higher place.”

The end of the video is dedicated to detailing the accomplishments of Detroit Will Breathe, despite the fervent opposition of DPD Police Chief James Craig, who, last month admitted to treating Detroit Will Breathe activists differently than those supporters of President Donald Trump who stormed Detroit's presidential ballot counting center last month. Chief Craig claims those protesters acted peacefully, while DWB did not.

“Since forming, they have overturned the arbitrary, unjust, and racist 8 p.m. curfew imposed to squash protester rights,” the video for “We All Move Together” reads. “Brought scrutiny to the DPD, including a federal restraining order barring them from brutalizing protestors,” as well as “exposed an attempt to cover up police misconduct related to the death of a Black woman in police custody.”


Watch the video for “We Move Together” below