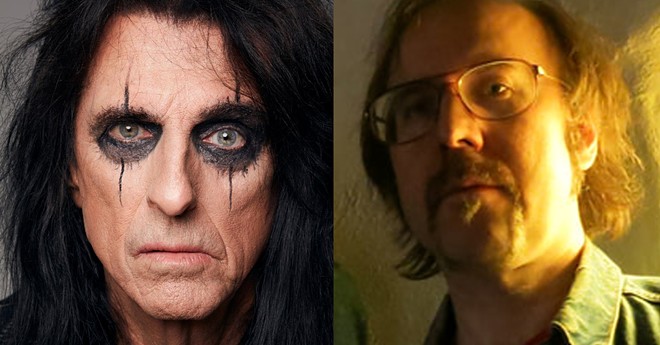 Well, this sure is... weird. Alice Cooper, the "The Godfather of Shock Rock," released a cover of "Our Love Will Change The World" — an offbeat yet sunny, jangly slice of bubblegum psych-pop from Detroit rock 'n' roll band Outrageous Cherry.

In a press release, Cooper admits the choice to cover the 2005 song was a strange one.

"I think 'Our Love Will Change The World' is one of the oddest songs I've ever done and it was one that came to us by somebody else, another Detroit writer," Cooper said in a statement. "And it was so strange, because it was happy and what it was saying was anything but happy — it was simply a great juxtaposition. And I got it immediately and said 'okay, this is going to be great.' The music saying one thing and the lyrics saying something else, I love that song. It is totally different from anything else on the album."

Also odd is that the press release never identifies the song as originally being by Outrageous Cherry, which has been led by songwriter and producer Matthew Smith since 1991. (Smith retired the band after longtime guitarist Larry Ray died in 2017 at age 63, though he has continued to perform Outrageous Cherry songs as Matthew Smith Group.)

But Smith, an affable guy who we seemingly run into any time we go to any rock show in town, appears to be unfazed by the snub.

"I am just very excited about it!" he tells Metro Times via email. "Alice Cooper and producer Bob Ezrin have always been a HUGE influence on me."

The cover is the second single for Detroit Stories, Cooper's next studio album, due Feb. 26, 2021 on earMUSIC. Smith says he even met Cooper when he was in town for the recording sessions and played guitar on another track.

The press release describes the record as "a celebration of the sound and spirit of the Golden Era of Detroit rock" of the late 1960s and early 1970s.

"Detroit was Heavy Rock central then," Cooper said in a statement. "You'd play the Eastown and it would be Alice Cooper, Ted Nugent, the Stooges and the Who, for $4! The next weekend at the Grande it was MC5, Brownsville Station and Fleetwood Mac, or Savoy Brown or the Small Faces. You couldn't be a soft-rock band or you'd get your ass kicked."

He added, "Los Angeles had its sound with The Doors, Love and Buffalo Springfield. San Francisco had the Grateful Dead and Jefferson Airplane. New York had The Rascals and The Velvet Underground. But Detroit was the birthplace of angry hard rock. After not fitting in anywhere in the US (musically or image wise) Detroit was the only place that recognized the Alice Cooper guitar driven, hard rock sound and our crazy stage show. Detroit was a haven for the outcasts. And when they found out I was born in East Detroit... we were home."

You can listen to Alice Cooper's cover below, with an amusing animated video.


It's perhaps the highest profile cover of an Outrageous Cherry song. A decade ago, Canadian indie rock darlings the New Pornographers also covered OC for an EP. Outrageous Cherry also landed on the soundtrack to the 2006 film Black Snake Moan.