Dirt Room finds resonance in music that sounds ‘kinda out there…’ 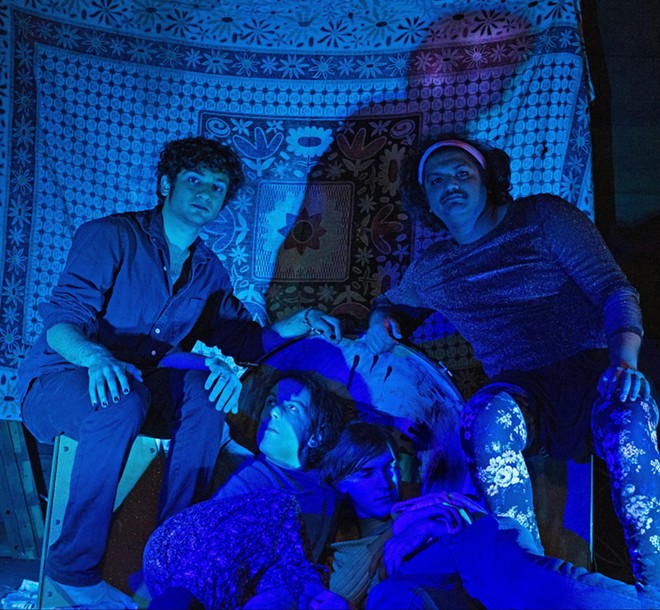 What would the music of the apocalypse actually sound like? Perhaps not really punk or death metal, but maybe something that defies structure altogether? In a world gone mad, maybe music that sounds defiantly eccentric would just feel exceedingly cathartic right about now...

Dirt Room is a Detroit-based musical project made up of mainly of two people, but it’s had a somewhat elastic membership so far. On Wednesday, SJ Sprague and Patrick Norton will release Summer Salts, a trancey, sinuous song cycle of modernist no-wave utilizing guitars, guttural vocals, experimental percussive arrangements, dissonant counterpoint patterns, layered samples that are haunting and mesmerizing at same time, and a smattering of eerie minor keys.

You could say their approach to music employs deconstructionism, but if they disregard conventional forms and arrangements it’s not coming from a hell-raising sort of musical mutiny, but almost closer to whimsy. They’re the guys who break apart the appliances and rebuild them into something else entirely. In fact, Sprague had done just that when he was younger, working with another Lansing-area artist, Matias Brimmer; they would record something, then open up the cassette cases, chop up the magnetic tape, and then re-tape disparate parts together to create something entirely new (and, at times, alien-sounding).

“Getting into shoegaze, and then ambient music, was pretty pivotal,” says Sprague. “But then, listening to the bootleg recordings of the Velvet Underground was also really striking. Because, those aren’t ‘great’-sounding recordings, but I can still enjoy them. I realized you didn’t have to have a perfect recording to make music. A big philosophy for Dirt Room, especially during the Summer Salts era, was that you can make music at any time, in any place, with whatever you have around you. You don’t need a studio, you don’t need particular instruments.”

Sprague says there would often be nights when he and his bandmates would stay up late into the evenings “banging on shit” or “clinking glasses” with every one of them singing at once. Which “was kinda silly,” he admits, “but still part of that same philosophy — that we can do this. There are no specified materials needed to make music. You can make music with whatever’s around you.”

We live in abnormal times, and those times no doubt encourage abnormal music.

“(Summer Salts) really goes all over the place,” says Sprague. “There’s punk stuff, ambient stuff, tape-collage. Over the years, we’ve gotten heavily into samplers and synthesizers. It’s almost too dynamic to be sustainable. We were approaching music in so many different ways.”

Dirt Room’s been in existence for four years, with Norton and Sprague as the primary members, along with Sprague’s brother Simon, Mahadeva Kota, Sree Kota, Jack McKay, Mat Hagger, and Cameron Frank. After the pandemic wrecked the routines and conceptional rehearsal opportunities of bands everywhere, this project pretty much wound up being a duo — for now.

“But, how we operate, today, is still us trying to maintain an openness to experimentation,” says Sprague. “And, always pressing ‘record.’” Anything and everything could be a usable idea for Dirt Room, whether it’s collaging reel-to-reel tape recordings, dabbling with some beats, zoning out with some loops, or just creating wordless vocal sounds on the fly. This mentality predominated their creation process for the 13 capriciously threaded tunes on Summer Salts.

Sprague started the band with his brother when they were living in Lansing in 2016; members of that original lineup have since moved on, but Norton soon came aboard and the three of them spent the next year creating home recordings that were purposefully collage-like in structure. Much of what’s captured on this album comes from that fertile period of abstractionist compositions between 2016-2018. “A lot of people have worked on this project, a lot of people have come and gone, and we just felt like this stuff needed to be released; the other musicians who have worked on it deserve recognition,” says Sprague.

Sprague’s been writing songs since he was 10 years old, working things out on an acoustic guitar; things really took off once he started working with digital audio workspaces and producing his own recordings. Oh, and the day he got a loop pedal? That was a biggie. “A life-changing moment,” he says. “Because I always thought of songs as being built horizontally, with a verse, a chorus, a bridge... With a loop pedal, I could build stuff vertically. I started thinking more about the vertical layers of a song, and that informed my production style.”

For Norton, he was a classically trained guitarist and went on to study music technology at Wayne State. Up until his 20s, he’d worked on material in solitude, making beats and weird experimental electronic music. “So, this is the first real band setting I’ve been in,” he says. “And I was the same way, thinking songs were horizontal. After working with (Sprague) and (his brother) Simon, it really broke down how I thought about music and expanded the capabilities for songwriting.”

The impulse for someone listening to Norton and Sprague talk about their process would be to reach for a cliche like, “they sure do think outside of the box.” Sprague acknowledges that as a fair enough surface-level assessment, “but it was more so that we were trying to create a new box where we could come up with our own way of doing things. To be in search of a new way, rather than settling for something.”


“Trying to develop our own language, musically, was a really big part of it,” says Norton. Both he and Sprague admitted that they’re disciples of a genre of music that emerged in the late '70s and early '80s known as no-wave — avant-garde in nature, rejecting popular and marketable music, opting instead for a deconstruction of traditional arrangements. For many, it can feel (and sound) like an entirely new language of musical creation. Trailblazers of no-wave include guitarist Arto Lindsay and Glenn Branca, but also composers like Steve Reich and Phillip Glass.

But it’s a misconception that artists like Norton and Sprague (or any of those aforementioned no-wave pioneers) are trying to be (or sound) strange on purpose. Sprague said that they write music for the sheer fulfillment first and foremost. The music on Summer Salts “might be kinda ‘out there,’” Sprague admits, but “honestly, that’s just the music that speaks to us the most.”

Norton posits that it definitely isn’t an attempt to sound strange — but rather, the ability to record anywhere, anytime, with anything, just organically allowed for the liberation to be strange. “And (working on music) has been the one silver lining of quarantine,” he says. “You have all this pressure of everything that’s been going on in the world, and there’s no other way to really find a release that pressure.”

This is the sound of music that’s resisting the pressure of the aforementioned apocalypse. The band was able to complete an EP that will eventually be the follow-up to Summer Salts, and there are some notably apocalypse-gazing anecdotes around that recording process. “We were in a studio and [producer] Chris Koltay was coming in to loan us some mics and set things up,” says Norton. But this was the weekend when everything shut down, last March, so a sense of moderate anxiety was pretty prevalent. “We were locked into this studio thinking the world outside was burning. And those pressures are inevitably what dissolved that previous lineup. So, that (forthcoming EP) captured the essence of what the group was, in that moment.”

Capturing moments that can’t be replicated, appreciating the exhilaration that comes with the creative process, developing a new form of expression despite all the day-by-day doom-scrolling. That’s Dirt Room. That’s Summer Salts.