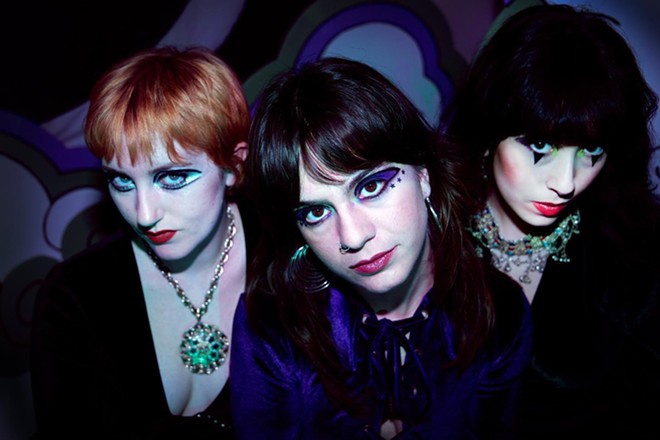 It could be said that 2020 was supposed to be the year for Shadow Show, Detroit's 1960s revivalist femme trio whose shag haircuts, flared pants, and expertly placed liquid-eyeliner are as groovy as their harmony-heavy psychedelia-steeped sound.

Not only did Shadow Show kick-off 2020 with being named as one of Metro Times' Bands to Watch, but Ava East, Kate Derringer, and Kerrigan Pearce also released their debut record Silhouettes on Valentine's Day, and had a tour planned, including a performance at the SXSW festival — all of which were canceled due to the pandemic.

And then, in July, their U.S. label Burger Records collapsed after label staff, as well as some of the label's artists, were accused of sexual misconduct. (The band is now signed to Greenway Records/Reverberation Appreciation Society, and U.K.'s Stolen Body Records.)

Picking up the pieces like a shattered lava lamp, Shadow Show returns with some trippy visuals and new-ish tunes that, according to the band, are “a righteously psychotic reaction to an increasingly chaotic world” and serves as an homage to '60s group the Feminine Complex. Right on.

Though Shadow Show released the pair of singles “What Again is Real” and “Is This A Dream?” in November — both questions that, for the trio, define a new era of sound, sparkles, and sky-high platforms — the latest live performance video/Lou Ramo-hosted talk show is in partnership with vintage-inspired U.K.-based clothing brand Scorpio Rising, which premiered the 14-minute long video on Instagram on Friday. Filmed with a kaleidoscopic filter, the live performance finds Shadow Show sporting Scorpio Rising's signature velvet jumpsuits and taking on hard questions, like “what's your most fantastical fantasy?”

Check out the live performance and talk-show kitsch below.