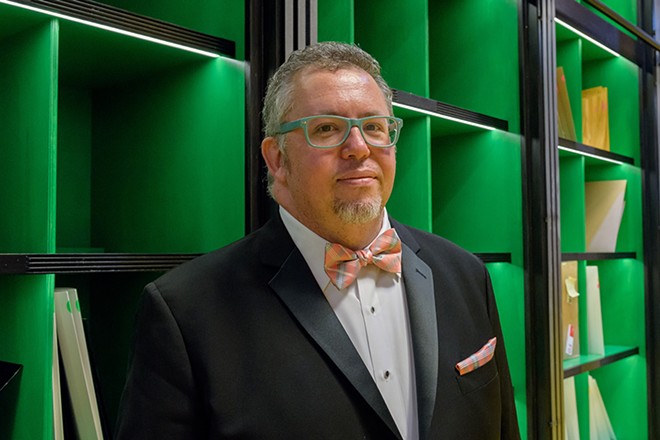 On Monday, March 8, former Metro Times music editor Mike McGonigal was hospitalized for complications including heart and kidney failure. His situation was so critical that on Thursday, he was moved to Detroit's Henry Ford hospital, and bracing for the worst, his friend Kathy Lindenmayer set up a crowdfunding campaign on GoFundMe with the aim to raise $45,000 for bills and other expenses.

The campaign exceeded its goal within 24 hours. As of Sunday, nearly 800 donors have raised more than $55,000.

Texting from his bed "at a great hospital," where he's awaiting a procedure on Monday, McGonigal tells Metro Times that he's shocked by the generosity.

"A lot of the contributors are old friends of mine but many I don't know," he says.

The goodwill should perhaps come as no surprise: A music journalist since 1984, McGonigal, 52, has no doubt made plenty of friends and fans along the way. Beyond Metro Times, he edited the Portland, Oregon-based arts journal YETI, and has written for Pitchfork, Spin, the Village Voice, and the book series 33 1/3, where he wrote a book on My Bloody Valentine's cult classic Loveless. He's currently the editor of Maggot Brain, a quarterly magazine published by Jack White's Third Man Records.

McGonigal tells MT that he went to the hospital after he "really felt like shit for two weeks."

"I had just gotten myself back onto health insurance with goal to get healthier and was due back at dr's office for bloodwork," he says via text. When the medical staff took his pulse, it was high — 188 — and called an ambulance.

"I was in heart failure and was told I might stroke out," McGonigal says.

"Definitely discomfort but I have had worse pain," he says, adding that his condition caused him to have "severely impaired cognitive functions" from Tuesday through Wednesday. "It's like this is my first texting done with lucidity tbh," he says.

While he has healthcare through the Obamacare marketplace, he says he's grateful for the donations. "I hate that I have to immediately worry about $ in this country after near death experience," he says, and adds that he's already spent a "good chunk" of it. He thought he might need a liver transplant, but is no longer sure. Still, "I still don't have my full health diagnosis," he adds.

McGonigal says he's eager to return to health so he can finish his Detroit Gospel vinyl reissue series.