Detroit composer, jazz trombonist, and hard-bop pioneer Curtis Fuller has died at the age of 88 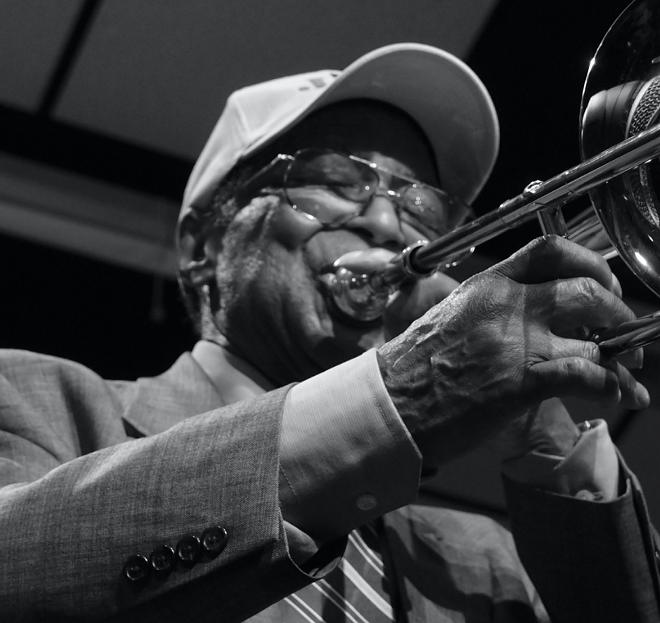 Celebrated jazz trombonist, composer, and integral player in the development of the hard-bop movement of the 1950s and 60s, Curtis DuBois Fuller, died in Detroit on May 8 at the age of 88.

Born in Detroit in 1932 to Jamaican parents, both of whom died while he was a child, Fuller turned to music in high school, though his interest in jazz was first piqued when a nun at his orphanage took him to see a performance by Illinois Jacquet. At the age of 16, he discovered the trombone — the instrument that would lead Fuller to play alongside some of the most notable players of the genre, on some of the most important recordings of all time, before entering the pantheon of jazz pioneers himself.

“Fuller was strongly rooted in the fundamentals of blues, swing, and bebop, and his improvisations balanced head and heart in compelling fashion,” author of Jazz From Detroit Mark Stryker wrote. “He married a lickety-split technique with soulful expression, and even in his early twenties, he had a distinctive identity ideally suited for the hard-bop mainstream.”

Fuller continued to play in bands even during his two-year stint with the U.S. Army and, once he returned to Detroit, began playing in a quintet led by Yusef Lateef. Fuller, Lateef, and the group recorded a trio of records in New York City. Per The Washington Post, in just nine months after landing in New York, Fuller established himself as a Blue Note force, led and co-led eight recordings, and appeared on 15 others as a sideman.

Perhaps Fuller's most notable appearance during this era was his work on John Coltrane's 1958 recording Blue Train, which Coltrane had cited as being his favorite of his career. At the time of Blue Train, Fuller was just 22 and said he only had three hours to learn the music before recording commenced in a studio in New Jersey, hence Coltrane renaming one such song “Moment's Notice.”

“Curtis was a truest consummate artist, a lifetime friend,” drummer and collaborator Louis Hayes said of his friend in a statement. “I'm very honored that this classical art form brought us together. What a wonderful journey we have had.”

In 2007, Fuller was named a Jazz Master by the National Endowment for the Arts, and, according to his daughter Mary, he considered a tribute to his work during the 2017 Detroit Jazz Festival to be one of the greatest and most touching honors he ever received.

“I'm just waiting for the old man upstairs to tap me on the shoulder and go, 'Okay, buddy,' Fuller said in an interview in 2008. “But I make the most of it while I'm here.”

Saint Peter's Church in New York City will host a virtual memorial for Fuller on Sunday, June 6 from 3:30-5 p.m. Those interested in attending the Zoom memorial must RSVP at SaintPeters.org/events/Curtis-Fuller-Memorial. Watch one of Fuller's early performances below.