Elton John announces yet another final farewell date in Detroit, and we are not worthy 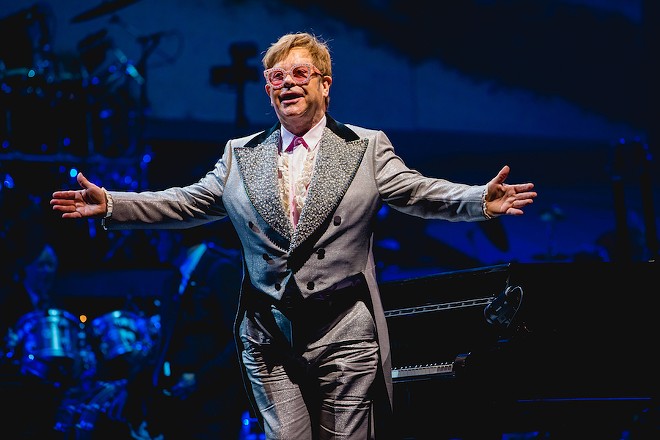 Pride month ain't over yet.

Light up those wind-blown candles, because the sun is not going down on Elton John's massive three-year-turned-four-year farewell world tour, proving that the bitch never really left.

The 300-date career-spanning victory lap dubbed the "Farewell Yellow Brick Road Tour" kicked off in 2018, which included a stop at Detroit's Little Caesars Arena that fall. Then, the now-74-year-old "Rocket Man" plotted to make a return trip to Detroit last spring for a pair of back-to-back shows which were, along with the rest of his itinerary, unsurprisingly postponed due to the pandemic — until now.

Announced Wednesday, John is keeping good on his tour promise and will not only fulfill the previously announced pair of dates at LCA Feb. 8-9, 2022 but will bid his likely final adieu to his legion of Detroit fans when he performs at Comerica Park on Monday, July 18, 2022.

We're not sure about you, but this certainly sounds like a good opportunity for a cameo from John's notable Detroit rapper friend who may or may not have gifted the legendary piano man a pair of diamond-encrusted cock rings in honor of his civil union. Your move, Slim.

Tickets go on sale at 10 a.m. on Wednesday, June 30 via Tigers.com/EltonJohn.

Elton’s final ever tour returns to the road this autumn.
Join the Rocket Club for a major tour announcement on June 23, 2021.
🚀 ➡️ https://t.co/D9tLnYYtAA#EltonFarewellTour pic.twitter.com/TNTKdCjrQi