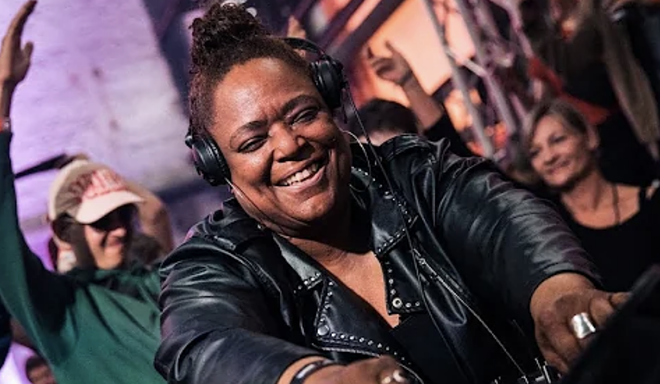 Detroit-born, Hand has been credited with paving the way for Black women in the male-dominated dance and techno music industry and is hailed as being the first woman to release an electronic music record before techno grew into an international fascination. In the 1980s, Hand started immersing herself in New York's club scene where she also worked at a phone company and, eventually, began getting her feet wet as a formidable force behind the decks.

"I pretty much was frequenting Paradise Garage in New York, for the most part," Hand told Metro Times in 2015. "There were a few clubs in Chicago. After frequenting Paradise Garage so many times I wanted to buy the records because I loved the music. So the next step was, I got to play these records in order to hear them," she said. "That led to purchasing a couple turntables which also led me to DJing in my own bedroom and to do a residence at Zipper's Nightclub."

By the 1990s, Hand had proven herself a force and founded UK House Records which was later renamed Acacia Records, reportedly after a street in Detroit. There she released her 1990 debut EP, Think About It, which found Hand (whose DJ moniker was selected to leave her gender ambiguous) collaborating with techno greats and founders of the Underground Resistance Jeff Mills, Robert Hood, Mike Banks, along with Mike Clarke. Her first studio record came in 1995 and, up until a month ago, Hand was continuing to release mixes, boiler sets, and new tracks, and EPs.

Hand was slated to perform in London later this month.

"When I started, there were no cell phones, no computers," Hand told Metro Times. "We were using the caveman style back then! Now, everything is so convenient. Computers are supposed to solve problems, so it's a lot more easier to get things done — although we have to watch out for crashes now," she said. "It's amazing how the industry has grown and continues to grow. It's not going anywhere at all."

No cause of death has been revealed but has been confirmed by friends and family on social media, as well as by the Guardian.

"You leave us with an inspirational Detroit music legacy," Detroit and New York techno stalwart Mike Servito posted on social media, just one of many tributes made by Hand's peers and fans alike, some of which can be read below.

Mad respect for Kelli Hand. We finally met in London of all places a few years ago. Those Acacia records; she was pioneering! You leave us with an inspirational Detroit music legacy. Thank you. Rest eternal, K-Hand 💜 pic.twitter.com/wmxyn3EtXK

The news is true. My sis, my friend since high school, the First Lady of Detroit Techno, the great Miss Kelli Hand is gone. I’m at a loss for words. pic.twitter.com/bP3xgLaWoh

A devastating loss for techno, & music culture as a whole. Kelli Hand contributed more to techno than any woman I know to date, and the path she blazed, while many others benefit from the doors she opened, remains unique & special.

Thanks for the music Kelli pic.twitter.com/R5UZiHLjAv

Much love to Kelli Hand. Yes, there were difficult moments, but she did great stuff when there were no other women doing it like she did. She paved the way and will always have our love and respect.

We are devastated to hear that Detroit house and techno legend Kelli Hand (aka K-HAND) has died.

She was officially recognised as 'The First Lady of Detroit' in 2017 for her accomplishments in a male-dominated industry. Her impact on dance music has been monumental. RIP 🖤 pic.twitter.com/ZrVIaHUBvR


So sad to hear about the passing of Kelli Hand. Our Detroit Sista will truly be missed. Deepest condolences to all her family and friends. We keep losing our musical family folks. Look deep in your heart and love one another. pic.twitter.com/JSRMOk9rNW

Kelli Hand always treated me with kindness. She was super fun. I got to play after her at Tuf in 2017 which was an honor. She ripped up that party & played so hard. I loved randomly seeing her on the road after. I have a lot of respect & will miss her. RIP you legend.

Such sad news to wake up to. RIP Kelli Hand, one of the most important pioneers of Detroit techno. X pic.twitter.com/LeMfi5IXTe


Watch K-Hand do what she did best below.