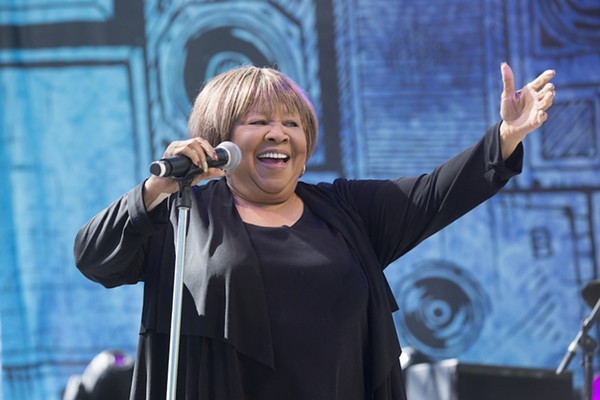 If you caught Questlove’s directorial debut Summer of Soul, then you might recall a nervous and totally transcendent Mavis Staples singing alongside Mahalia Jackson.

The documentary, composed of unearthed stunning footage and performances from the 1969 Harlem Cultural Festival, later dubbed “Black Woodstock,” features performances by Stevie Wonder, Nina Simone, Sly and the Family Stone, and Staples, who was passed the mic during Jackson’s performance of Martin Luther King Jr.’s favorite song, “Take My Hand, Precious Lord.” Now at 82, Staples is revered as an icon.

Staples, a legendary gospel singer who has done the following: marched alongside Dr. Martin Luther King Jr. in Selma, Alabama; performed at the inauguration of John F. Kennedy, and, years later, for President Barack Obama; has been inducted into both the Rock ’n’ Roll and Blues halls of fame; been the subject of a 2015 HBO documentary; has collaborated with Bob Dylan, Prince, Gorillaz, Pusha T, Arcade Fire, Ben Harper, and Jeff Tweedy, and, on 2011’s Grammy-winning Livin’ on a High Note, she covered songs by Nick Cave, Tune-yards, Neko Case, M. Ward, and Justin Vernon.

This is but the tip of the iceberg in terms of Staples’ incredible career as the coolest woman in music since she was 13 years old performing gospel music with her father and her siblings as the Staple Singers, a group that scored a Lifetime Achievement Award from the Recording Academy. Staples will perform at Wildwood Amphitheatre as part of Audiotree’s “Across the Stars” summer concert series.