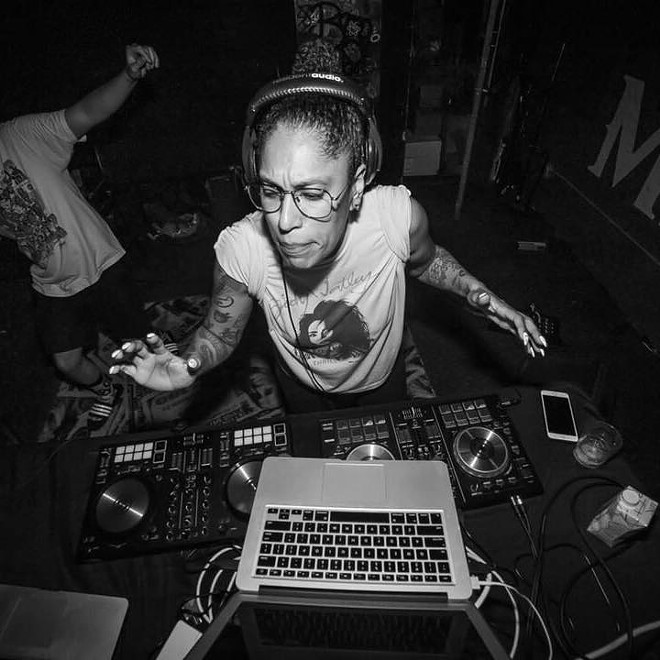 Sara Aldridge, a Detroit DJ who performs as Nothing Elegant, was sentenced to two years of probation after being charged with allegedly embezzling more than $50,000 from 1xRun, the fine art print house that owns the Spot Lite music venue and hosts the Murals in the Market festival.

According to court documents, a warrant was signed for Aldridge’s arrest in 2019, and she was sentenced in July 2021, after the felony embezzlement charges were dropped to a misdemeanor of larceny of more than $200 but less than $1,000, to which Aldridge pleaded no contest.

Reached by phone, 1xRun co-founder Jesse Cory says that 1xRun’s insurance company intends to pursue the embezzlement charges in civil court. He believes Aldridge stole more — perhaps more than $100,000 — but $40,000 was all that the company could prove in court.

“The fact that she paid the restitution means that she’s actually admitting to the bigger crime,” he argues. According to the court documents, Aldridge paid back $42,739.46.

According to her LinkedIn profile, Aldridge worked as a business manager for 1xRun from 2015 to 2018. The dispute went public last week in a Facebook post by 1xRun co-founder Dan Armand.

“We know rumors have been circulating out there for years, and during this entire time we have not made any public statement,” he wrote, adding, “Now that this has been fully resolved in the courts, we feel it is our responsibility to share this information with everyone as a matter of public record so that this does not happen to anyone else in the future.”

Cory says the disclosure was prompted by a mass email Aldridge sent earlier this month as part of her new role as a “Detroit action strategist” with a nonprofit called ioby Detroit, which helps people fundraise projects for their communities, where she touted her experience with 1xRun.

“She uses Murals in the Market in her biography,” Cory says. “Four weeks earlier, she paid restitution for stealing from that organization. ... She has no shame.”

Aldridge has since set her social media accounts to private. Reached by email for a statement, Aldridge deferred to her attorney, George Brown.

“Ms. Aldridge was criminally charged with a felony because of a financial disagreement with her former employers that we believe should have been handled as a civil matter,” Brown writes in an email to Metro Times. “The case was resolved with a dismissal of the felony and no admission of guilt, which says a lot. Ms. Aldridge continues to dispute many of the allegations against her but she made the decision to seek a resolution and move on with her life. At sentencing, I expressed my concern that Sara’s former employers would attempt to interfere with her ability to work in the future. I’m disappointed to learn that my suspicions appear to have been accurate. Beyond this statement, Ms. Aldridge has no current plans to publicly address the matter.”

Cory says that accounting issues came to light under Aldridge, including a repeated issue with check numbers not matching their checks. He also says about halfway through Aldridge’s employment, the company’s entire QuickBooks database became mysteriously corrupted.

“The way that this campaign was pulled off was by creating chaos within our bookkeeping,” he says. “So you’re always looking in the other direction. This put a huge amount of stress on not just the owners, but all the staff. I mean, every day she would say we are going out of business because we just couldn’t find enough money for our expenses.”

While 1xRun began investigating the bookkeeping anomalies, Aldridge abruptly resigned. The company hired an accountant, who discovered that Aldridge gave herself a bonus on her last day, which Cory says raised a red flag. Other bonuses and overtime pay that Aldridge paid herself were also found.

Cory says he was blindsided by the discovery.

“She was somebody that was vetted by our social circle, she knows everybody in the community,” he says, adding that as a DJ, Aldridge has thrown fundraisers for groups like Planned Parenthood. “We never would ever have suspected that person would be like that.”

Cory says the alleged theft caused the company to furlough its employees and led to the decision to sell its Eastern Market gallery and headquarters in 2017. He also says the company suffered reputational damage from not being able to pay the artists it worked with.

“It was crippling,” he says.

Before 1xRun, Aldridge worked for the Our/Vodka tasting room in Southwest Detroit and the former Russell Street Deli in Eastern Market, among others.

Our/Detroit’s Kate Bordine, who also owned the former Ponyride space in Corktown, could not comment.

Ben Hall, the former co-owner of Russell Street Deli, says Aldridge worked as a catering manager for him for several years.

Hall says Aldridge quit just before he was about to fire her for spending too much time on social media. He says he cannot prove Aldridge stole from the restaurant, but noticed that numerous invoices she was responsible for were left open when she quit, with no way of telling where the money was.

“We were kind of just taken aback,” he says.

Hall says he’s glad 1xRun was able to have any success in court. He says he had a difficult time dealing with other cases of fraud while working at Russell Street Deli.

“The fact that they were able to pull this off and actually see it through, I think is going to help other employers recognize that they have options, and kind of let employees know there are consequences,” he says. “Now, in this case, there has to be some accountability from Sara in terms of her moving forward with other businesses that she could jeopardize and others whose livelihood she could jeopardize.”

Russell Street Deli announced its closure in 2019, when it could not afford to make a $50,000 repair ordered by its new landlord.

“You can only take so many hits over a certain amount of time before you go out of business,” Hall says. Now, Hall runs a pop-up at Spot Lite called Lil’ Bruh that serves fried rice and noodles.

Hall says a thief employee can create even more chaos in an already chaotic environment of a small business.

“You have to start casting the evil eye on all of your employees to figure out who the person is,” he says. “And that’s basically the worst feeling I think I’ve ever had owning a business, trying to figure out who the thief was. It’s not like Clue. It just does something really kind of ugly to your soul.”