Red Hot Chili Peppers are coming to Detroit next year with the Strokes and Thundercat, you know, as a treat 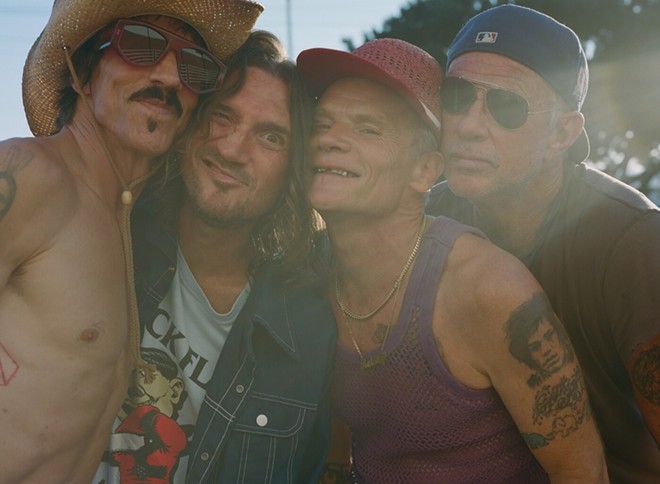 Oh, how we've waited to be "standing in line to see the show tonight, and there's a light, a heavy glow." As we look to 2022 — and the many tours that have been scheduled for next year — it almost feels like we're on the "Otherside" of the pandemic (though not really.)

Who will be waiting for us when we, uh, you know, do reach the other side?
California alt-rock faves Red Hot Chili Peppers announced a global stadium world tour Thursday — and they've called in the big guns for support, or, as one Twitter use put it "they really are having festival headliners as opener."

The 32-city tour in support of their forthcoming album kicks off next June in Spain and will visit Detroit's Comerica Park on Sunday, Aug. 14.

The shirt-adverse Anthony Kiedis led outfit will alternate supporting acts, which include Beck, St. Vincent, HAIM, A$AP Rocky, Anderson .Paak, and King Princess. For the Detroit date, though, we'll be treated to performances by indie rock pioneers the Strokes and funky guitar virtuoso Thundercat, both of whom released records in 2020.


RHCP were last in Detroit in 2017 when they visited Joe Louis Arena in support of their 11th studio album The Getaway. The newest set of dates, however, will mark the first trek with newly reinstated guitarist and cosmic solo artist John Frusciante in over 13 years.

Tickets go on sale Friday, Oct. 15 at 10 a.m. and can be purchased via tigers.com/rhcp, as well as at the Comerica Park box office.