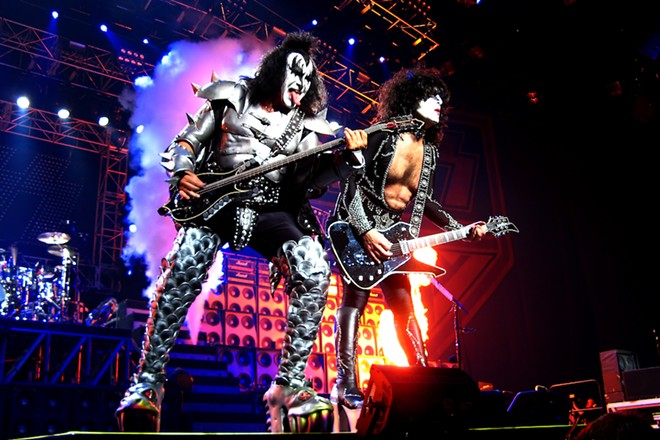 Will this be the last time we write about beloved wearers of flame-retardant space armor and clown paint?

It’s possible, seeing that the members of controversial campy rock band KISS are finally saying goodbye to the touring life as their massive farewell world tour is finally passing through metro Detroit Rock City after they were forced to postpone the concert by a month because Paul Stanley and Gene Simmons tested positive for COVID-19. And even though Stanley was seen parading around Los Angeles days after his diagnosis, sans mask, everyone on the tour from band to crew are fully vaccinated, going as far as to have a “COVID safety protocol officer” on staff full time.

Formed in 1973 New York City thanks to an ad placed in the Village Voice, KISS has managed to be a contender on both “best” and “worst” rock ’n’ roll band listicles for more than 45 years. Some hail the band for being harbingers of pseudo-satanic arena-rock and showmanship. Others are quick to chastise the band’s tongue-wagging, blood-spitting, glam rock gimmickry, uncompromising pageantry (er, stagecraft), and undying misogyny. If you’re Aerosmith frontman Steven Tyler, you likely fall into the former camp and might share the sentiment that Kiss is a “comic book rock band [with] spackled faces [and] a couple of hits.”

“I believe we create unknowingly or knowingly, we create our destiny,” Stanley told Metro Times in 2019. “It doesn’t necessarily mean we wind up where we thought we would. We play a major role in determining our direction and that leads us to whatever we’re going to go to. So, this was the path that I wanted and to believe that I would be doing it 45 years later is unfathomable. Yet, here I am and here’s the band packing arenas and going down a storm because we’re KISS and we’re forever.”