Police are investigating Brass Against singer, a Detroit native, after she urinated on willing fan's face at festival 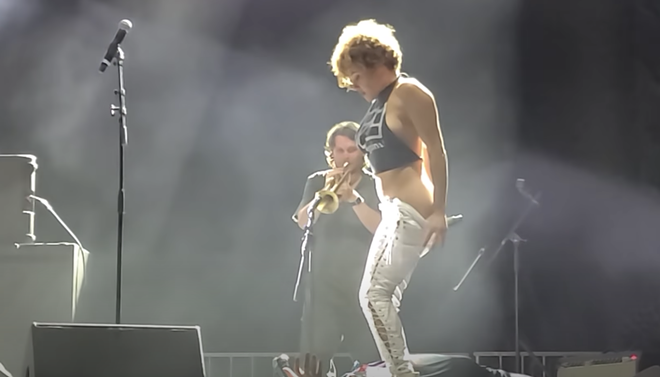 Rock bands have been shocking live audiences with elaborate staging, vile stunts, and gross-out moments for as long as anyone can remember.

There's, of course, the infamous incident involving the prince of darkness, Ozzy Osbourne, and a bat, which he beheaded between his teeth while performing in Des Moines in 1982. Jimi Hendrix set a guitar on fire, Alice Cooper would pretend to chop his own head off with a guillotine, Jim Morrison would whip out his dick from time to time, and "music's greatest degenerate" GG Allin used to cut and shit himself on stage, covering himself in the, uh, mostly liquids. Hell, Detroit's own Iggy Pop also has a rap sheet of wild performances, some of which have involved broken glass, peanut butter, blood, and a wee bit of vomit.

Well, it's clear, well, mostly clear, that another musician is vying for a top spot in the pantheon of gross stage shit — and she just so happens to also be a Detroiter. Go us!

Sophia Urista, a former contestant on The Voice (she ended up on Miley Cyrus' team, unsurprisingly) and lead singer of New York-based covers band Brass Against went vilely viral over the weekend when footage of her urinating on a fan's face (a willing fan, it should be noted) during the band's Thursday night set at Welcome to Rockville festival in Daytona Beach, Florida, began circulating.

According to reports, Urista had allegedly complained about having to pee several times during the set before summoning a human receptacle from the audience. A man with an empty tallboy can affixed to his forehead enthusiastically volunteered. He laid on the floor, between her legs, his camera around his neck, and, as she barreled through a rendition of Rage Against the Machine's "Wake Up," Urista pulled her pants down and, well, let's just say she really had to go. Like, Old Faithful had to go.

"Get my man with the can on his head ready," Urista was recorded saying. "'cause we’re going to bring him onstage and I'm gonna piss in this motherfucker's mouth. I gotta pee, and I can’t make it to the bathroom. So we might as well make a show out of it."

When her stream, uh, concluded, she kicked the giddy golden shower receiver off the stage, who shook off the piss like a golden retriever, and even spit it back into the audience because, yeah, it was very much in his mouth.

Per the Daytona Beach News-Journal, police received a Facebook message detailing what had happened at the festival. In Florida, it is unlawful for someone to "expose his or her sexual organs in public or on the private premises of another, or so near thereto as to be seen from such private premises in a vulgar or indecent manner." Michigan has similar laws, one of which specifically applies to public urination.

A police report has been filed, though it does not appear to have been filed from the person Urista used as a toilet. If charged, she could face a year in jail or a $1,000 fine.

The band issued a statement in which they admit that "Sophia got carried away" and informed fans that her pisstorical moment is not one that will be recreated at any other Brass Against shows, nor do they stand by what she did. However, they do defend the act as consensual. And, surprisingly (or unsurprisingly depending on what side of the piss stream you're on), a lot of people thought it was kind of cool.

"She did nothing wrong it was metal as fuck!" one Twitter user replied.

"It was inappropriate and gross but no one was victimized," another wrote.

"I have no choice but to stan the brass against pee pee lady," someone said.

"Lmao can’t believe people are still upset about that dude getting pissed on during Brass Against. He volunteered, she obliged. Plus, he did the Triple H spit with a mouthful of piss. It’s a metal festival, grow up."

"Imagine being into piss play and public humiliation," someone pointed out, adding that this must have been a "golden opportunity" for the lucky fan.

Someone even suggested the cover band change their name to "Rage Against the Latrine."


The NSFW video can be found here if you feel so compelled.

Everyone's posting about the Brass Against singer, I'm just over here like pic.twitter.com/0DfyHrDfdV