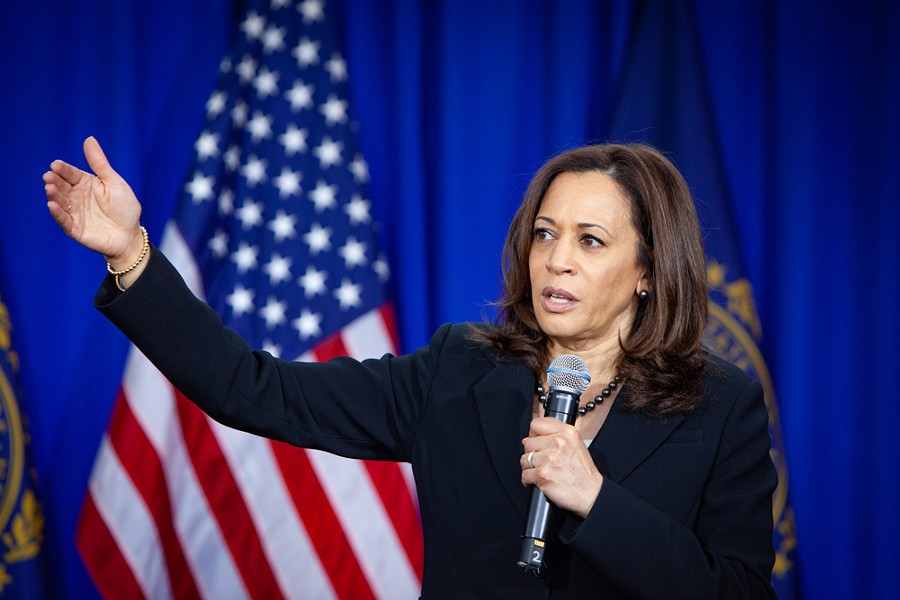 Since everybody in the world has to write a Kamala Harris think piece — IT’S THE LAW — here’s mine. You’re welcome, make checks payable to CASH.

2. Kamala Harris might matter (a little). Black women are a loyal Democratic constituency, and they’re finally reflected on the ballot. Asian Americans are an increasingly important demographic, and they’re represented, too. (Harris’s mother was Indian.) More important: Harris will speak to suburbia, especially suburban women who have turned on the Republican Party in general and Donald Trump specifically. She’ll also get to spend the next three months carving Trump into bits, and if all goes to plan, on one special, glorious night she’ll get to make Mike Pence run home to Mother. That might be enough to move the needle a point or two in a couple of key states.

3. Kamala Harris is a cop. She was a prosecutor in San Francisco, then California’s attorney general beginning in 2011. Like most prosecutors, she did a lot of bad stuff, especially when bad stuff was in vogue. She threw people in jail for weed. She threw people in jail for truancy. She tried to keep people in prison after they were proven innocent. She defended California’s death penalty in court. She refused to involve her office in investigating dirty cops. Criminal justice reformers are understandably skeptical.

4. Kamala Harris the Cop also did good stuff. I first heard Kamala Harris’s name in 2011, during an interview with Philadelphia District Attorney Seth Williams. He admired her enormously and praised her as a reformer. He gave me her book and told me she was going places. (Williams ended up doing a couple of years in federal prison, but never mind that.) She implemented a prison diversion program in 2005 — before they were popular — and training programs to reduce police bias. As a presidential candidate, she released a solid criminal justice platform: ending the death penalty and solitary confinement, reducing mass incarceration, and eliminating cash bail and private prisons. She has also signed on to a bill to legalize marijuana, which goes farther than Grandpa Joe has.

5. Kamala Harris has the fourth most liberal voting record in the Senate. She holds the same ranking in the scores tallied by GovTrak (for 2017–18) and ProgressivePunch (through 2020). In the latter, she’s to the left of Bernie and Warren, a fact that will no doubt be finding its way to a sponsored Facebook post near you very soon. Keep in mind: Harris was running for the 2020 Democratic nomination from the second she walked onto the Senate floor in January 2017. (And no, that is in no way a fault.)

6. Trump doesn’t know how to hit her. The interminable drama aside, Harris has been the odds-on choice all along. Yet when the news dropped, the Trump campaign’s response fell flat. They (falsely) said she had called Biden a racist during a debate spat, then claimed she was a radical lefty who would be pulling Biden’s strings. Neither of those attacks has any staying power. Trump himself talked about how her campaign had shit the bed, which is true but irrelevant. There’s also the problem that Trump donated twice to Harris when she was California’s AG.

7. Kamala Harris is a Trump trap. The president wants to do two things at the same time: depress Black turnout by harping on Biden’s support of the Crime Bill in the ’90s and scare the bejesus out of whites with images of burning downtowns. But if he plays up Kamala the Cop to do the former, it negates the Biden-as-anarchist line. If he goes the other way, he’ll only highlight Harris’s professed commitment to the justice reform movement. For once, Harris’s career of slippery contradictions will work to her advantage. And if Trump can’t find a good, campaign-sanctioned line of attack, there’s a better than average shot he’ll pop off something horrifyingly racist and/or sexist before long.

8. Kamala Harris’s portfolio will be important. It’s obvious Biden wants Harris to be the Biden to his Obama — a confidante he can trust but also someone who fills in his resume gaps. Biden has old-timey Senate connections (though the Senate isn’t the institution it was in Biden’s day) and thinks highly of his foreign policy expertise (though he, uh, gets stuff wrong a lot). Harris is a hard-assed lawyer who sits on the intelligence committee, which would make her a good choice to lead a truth-and-reconciliation commission to investigate the Trump years — if Biden has the guts to go through with such a thing.

9. Kamala Harris = 46. There’s a general assumption that Biden won’t seek reelection in 2024, as he’ll be 82. Maybe, maybe not. Let’s say he does. If Biden departs with things in relatively decent shape — or if he, you know, dies — Harris would be the odds-on favorite to win the presidency. At the very least, as of today, she is the most likely person in the country to be the 46th president of the United States.

10. Kamala Harris =/= 46. If Biden loses this year, Harris has no claim to the nomination four years from now. After two consecutive losses to Trump, anything stinking of establishment won’t have a prayer. But even if Biden wins but doesn’t seek reelection, Harris won’t necessarily get a glide path. Biden will spend the first year of his presidency much like Obama did, digging out from the mess he inherited. If the Dems squander the opportunity to pass substantive progressive legislation, the ascendant progressive wing will rebel. A better packaged Bernie would have won the nomination this year. Four years from now, the party will be more liberal, and its progressive wing will be less willing to settle. Not for nothing, in 2024, Alexandria Ocasio-Cortez will be (just barely) old enough to run.

Get Informed Dissent delivered to your inbox: billman.substack.com.