Take a seat, Coachella. Step aside, Lollapalooza. Go to sleep, Woodstock 50. (Too soon?) Detroit's laid-back Mo Pop Festival returns to kick major festival ass, thanks to a bootylicious Detroit-born superstar, some ambient space-rock from Down Under, vampiric hitmakers, and a Colombian-American neo-soul songstress.

Once again, Mo Pop will take over Detroit's West Riverfront Park Saturday, July 27 and Sunday July 28 with a sprawling music wonderland featuring some of music's top names and emerging local acts. Last year, Spin hailed Mo Pop as one of its favorite music festivals due to its accessibility and its always diverse lineup. Last year, Bon Iver, Billie Eilish, the National, and St. Vincent took to the Mo Pop stages and in years past, the festival has hosted performances by Solange, Father John Misty, Modest Mouse, and Run the Jewels. One of the hallmarks of the festival, now six years running, is Mo Pop's two stages, where set-times never overlap so you can twerk with Lizzo and debate the "Oxford Comma" with Vampire Weekend. At Mo Pop, never will you have to choose. (Thank gawd.)

Among this year's performers are headliners Tame Impala and Vampire Weekend, as well as Kali Uchis, Snail Mail, Ella Mai, Caamp, Craig Brown Band, King Princess, Whitney, and more. So grab your flower crowns, slather on some sunscreen, and check out our 10 must-see acts, complete with some song suggestions to get you prepped, pumped, and ready to pop off.

Our "Apocalypse Dreams" are coming true, thanks to a festival appearance from Tame Impala. Notorious perfectionist Kevin Parker, who makes music as Tame Impala, returned this year with a pair of tracks that teased a full-length follow-up to 2015's critically acclaimed Currents. However, since dropping "Patience" and "Borderline," we have been without a new record. What gives? Well, during a recent interview, Parker blamed his own control issues on the record's delay, even going so far to say he has been tempted to edit the previously released tracks after the fact. We have three words for Mr. Impala: "Let it Happen."

Siena Liggins will steal your girl. We've had our eyes and ears on Detroit's rising queer pop performer for a while (we even put her beautiful mug on the cover of our annual Bands to Watch list earlier this year). Anyway, Liggins' brand of dynamic hazy queer pop has landed her on Billboard's list of "LGBTQ artsts to fall in love with." Earlier this year, she posted her phone number online to market her third single, "Me Again," and before that, launched an inclusive social media campaign to back "Naked" — the body-positive anthem we didn't know we needed. Though she's in no rush to drop a debut full-length, she's holding our attention (and then some).

Griff Washburn is off the grid. The Tennessee native who makes music as Goth Babe relies on solar power as he records all of his dreamy indie-pop EPs out of a camper he pulls around the country with his 1996 Ford F-250 with his dog Sadie in tow. Reminiscent of Jason Schwartzman's short-lived project as Coconut Records, Goth Babe takes the easy breezy-ness of the West Coast, and coats it in sonic rumination with a dusting of shimmery synths.

He could have been a football superstar. Instead, Atlanta-born Destin Route, aka J.I.D, took the rap path and is becoming one of the most promising rappers in the biz. After a notable feature on DJ Khaled's Major Key, J.Cole's label, Dreamville, scooped him the eff up, which led to the release of his 2017 debut The Never Story. It's on last year's DiCaprio 2 that J.I.D revealed a broodier side with tracks suitable for sleepless weekends and Scorsese scores.

We just took a DNA test, turns out we're 100 percent here for Lizzo at Mo Pop. Astrology might be bullshit, but this is the year of the Lizzo — the twerking powerhouse vocalist and flautist sensation who flaunts body positivity with her dimpled derriere and unrelenting "yaaasss queen" energy. This year Lizzo released her debut record, Cuz I Love You, sold out tours left and right, made a blowout Coachella performance, and her two-year-old bounce-back anthem for the brokenhearted "Truth Hurts" pierced the top 10 of the Billboard Top 100 charts and, as of earlier this month, the track is somehow elligble for a Grammy Award nomination. Better show up hungry. To quote the queen herself: "I'm not a snack at all, baby/ I'm the whole damn meal." 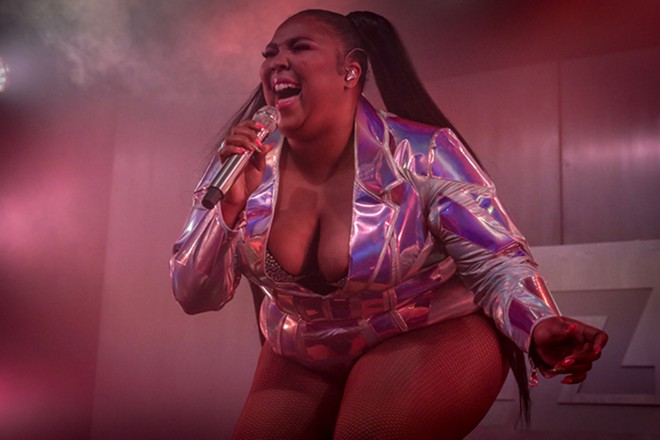 You can't escape Vampire Weekend, so don't even try. For years, the indie outfit fronted by Ezra Koenig has had its teeth deep in the veins of music critics and publications with its catchy AF indie pop. This year saw the highly anticipated release of Father of the Bride, Vampire Weekend's fourth record and first in six years.

Last year, when Metro Times talked to Snail Mail's Lindsey Jordan, she was newly 19 years old, packing up the car to embark on tour in support of the band's striking debut record, Lush.Well, shit. Jordan and her debut went on to dominate critics' year-end lists and was hailed for its emotional maturity, honesty, and clever repurposing of '90s lofi. Jordan's clear and cutting vocals against healthy doses of fuzz and shimmer pose many a diarial query. "Don't you like me for me?" she asks on "Pristine." The answer is, yes, girl. We like you a lot.

Even Kali Uchis didn't see Kali Uchis coming. The 25-year-old Colombian-American songstress put the pop world under her spell last year with Isolation — her mesmerizing debut record with a star-studded tracklist. After releasing her 2012 mixtape Drunken Babble, followed later by her seductive EP Por Vida, Uchis caught the attention of Lana Del Rey, Jorja Smith, Daniel Caesar, and Gorillaz. Cut to 2018 and Isolation wields the power of someone who knows what they want and where they want to go. For Uchis, it's safe to assume she's on her way up.

Listen to: "After The Storm" (feat. Tyler, the Creator and Bootsy Collins)

When mastermind hitmaker Mark Ronson calls, you pick up the dang phone. Brooklyn native and rising genderqueer singer-songwriter Mikaela Straus aka King Princess heeded the call for the producer's latest record, Late Night Feelings, which finds her channeling her inner disco queen with hints of Haim on "Pieces of Us." A mix of Alessia Cara, Perfume Genius, Beyoncé, King Princess is taking her genre-bending to new heights by pairing hard hitting emotional commentary against dynamic pop. "So tell me why my gods look like you/ And tell me why it's wrong," she begs on "1950" — a song inspired by the obstacles of queer love.

Straight out of Rochester, Mich., come the Doozers, who are doing a damn fine job expanding on the Strokes-sounding strain of quick and cutting indie rock that we never stopped loving. Which makes sense, considering the four-piece started in high school during 2015 and emerged from Rochester's School of Rock. Earlier this year, the Doozers released a handful of singles, including "Lemon Poppyseed," a track that flirts with the sound of fellow Mo Poppers Vampire Weekend, Young the Giant, and some surf rock. In other words, the Doozers might wear their influences on their sleeves, but they're spinning them into a radio-ready indie sound all their own.