Hello and welcome to the Metro Times' first-ever roundup of the 15 best new bands in the metropolitan area. We're calling it 15 Best New Bands (Best New Bands for short). Our list encompasses a wide range of ages, musical styles, and pizza preferences. One of the artists might be in his 50s, while the youngest is 13.

What were our criteria? In order to be on the list, an artist should have no more than one physical full-length release. Some artists (like Sheefy) do have more than one mixtape, but they primarily exist in Soundcloud form. This emphasis on the physical might be a bit old school, or arbitrary, but it works for us. We really believe that everyone on this list is super talented and deserves mass adulation. We cannot wait to watch them each grow, and get even better — over the next year, and beyond.

Before you go ahead and send nasty emails or sling derogatory comments in our general direction, we'd like to clear a few things up: You're right! Music editor Mike McGonigal isn't even from here, originally. Dude grew up in Cleveland and then had the nerve to live all over the country. How could he possibly have ever heard music made by people from here, seen those musicians on tour in other places, or read about that music, all while living in another place? Plus he's only lived here for one year now. 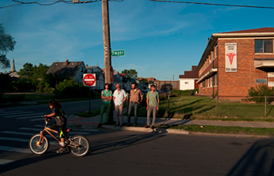 So how could he possibly know a single thing about the local music scene? And how is it remotely possible that Paint Thinner isn't even on this list? Not to mention Tarpit, Heathered Pearls, Yellow Rail Family, Deadly Vipers, You, Deadbeat Beat, Sinistarr, Daher-Malis Duo, Gabi, Prude Boys, Spelling, Casual Sweetheart, Count Mack, or the genius electro performance project I started in my attic last month? We actually like all those artists, and do hope to cover them as soon as possible.

They have toured a little bit, play shows around town here and there, and self-released one great cassette tape called Dad Rock. But Mountains and Rainbows have been one of Detroit's' best kept secret for some time, now. Lead singer and guitarist Matt Ziolkowski says that the band has been around for 10 years but the last two years' worth of work and focus make up for the previous eight years' lack thereof. Their anonymity ceases next spring when their double-album debut, Particles, comes out on Castle Face, the label run by Oh Sees frontman John Dwyer, who took an instant liking to the band after playing with them at PJ's last year.

Angular but poppy, restless but purposeful, the album updates the subtly propulsive sound of the Feelies' first record by adding psychedelic mumbo jumbo to it. It's related to Midwestern punk, but it's closer to a new wave hippie rock, buoyed by nihilistic optimism — the best of two worlds.

"Listening to our forthcoming record is like meditating by a riverside; but it is also like going to the zoo to see a newly born red panda bear named Tofu," Ziolkowski says. "What I'm getting at is that it is both a mellow and exciting listening experience."

The latest incarnation of the band finds Matt Z abetted by Ryan Harroun and Andrew Barrett, each accomplished multi-instrumentalists and songwriters. For the first time, they'll all be writing songs alongside Matt. "It just makes sense to try to utilize those talents," Ziolkowski says. "If in the future you see a Detroit band called the New Grateful Dead on the Block, you will know that it's just us guys sharing the singing/songwriting duties. And you'll more than likely hear the laughter of a good time had by all." —Mike McGonigal

This has been a busy year for Britney Stoney. She wrote and staged a musical, released an EP, and performed frequently. The neo-soul artist started out playing open-mic nights a few years ago, made some connections, and has since played many of Detroit's most beloved festivals, including this year's Dally in the Alley. Born and raised in Detroit, she's been living in the Eastern Market for a few years and loves the area's creative energy. "It's really inspiring to be around people doing what they love," Stoney says.

At just 25, she was named a 2014 Kresge Foundation Artist Fellow. And along with 18 other artists in the tri-county area, she received a grant to put toward her creative vision. "It was pretty life changing," Stoney says. "It definitely took my creativity to another level." The Kresge Arts Fellows all performed at the Art X Detroit Festival in April. Stoney wrote and staged a musical titled Save Yourself, which she counts as her proudest moment as an artist so far.

Among other things, the grant allowed her to purchase some equipment, which has helped her expand her sound. She started out performing and recording with just a guitar and her voice, but her music's now more electronic. These newer songs became her Native EP, self-released in July and almost entirely recorded in her home over the past year. She's added a strong house influence to her signature blend of R&B and folk. And it still sounds like Stoney. She's a great singer and strong songwriter, and now it's clear she's a talented producer on top of it all. Her songs stick with you. Lauryn Hill and Erykah Badu are clear influences — and like those artists, she's able to combine deeper lyrics with pop choruses. We recommend checking the EP's tracks "Stay Down" and "Highway" immediately.

Stoney's also gone from performing solo to playing with a full backing band. After performances at the Fox Theatre for TEDx on October 8 and the Detroit Institute of Arts on October 18, Stoney plans to take a hiatus from performing locally to focus on writing more music and creating visuals for it, and then touring. Whew. —Jenny Farajbeik

Sheefy McFly is Detroit's quintessential renaissance man. He's a Red Bull House of Art honoree who's sold paintings in Berlin and painted one of the illest murals you've ever seen in Corktown. "Before I started taking music seriously, I was sort of a hermit hiding behind my art," Sheefy says. "I've been making art my whole life so I had dreams of being Picasso before being Kanye. Music became my voice, my rebellion, and another emotional release," he says.


"A turning point in my musical career was creating the monthly showcase 'The Air Up There' at Bob's Classic Kicks. At the time, I was too young to rock at any venue. So my good friend Jason at Bob's let me host the event there, and it evolved into the voice of the new generation of Detroit hip-hop. It became our Hip Hop Shop," he says.

Sheefy's music is dope, offbeat, edgy, and street in a definitively Detroit kind of way. His 2011 single, "Eating Sushi Slapping Hoes" and his 2012 song "Hilfigger" and mixtape Northernplayalistikcapricemuzik were his "Look out muthafuckas, I'm here" moment.

"When I make albums, they are conceptual, as if it were a painting," he says. "I create my covers so each cover embodies the emotion of the album. I consider my music audio art. And I don't bound myself by genres. Over the years I've become a prominent rapper/producer, DJ, alternative vocalist. I had a punk rock band too. My music isn't boom-bap or trap, just a reflection of my many emotions and concepts."

Sheefy's most recent release is Detroit Slim (Rager Haus), an album in both digital and physical formats. It's bit of a tribute to blaxploitation films that features humorous skits and his usual brand of witty hip-hop. There's another record planned for later this year, and he has no plans to stop releasing music. "I honestly have enough music to drop a single weekly until I die [laughs]," he says. "I do everything in house with Rager Haus, so I will release it if my listeners will keep listening."

While Sheefy appreciates the nonstop love he's gotten as a visual and musical artist, he understands that the rest of the world is still catching up. "Detroit has shown me nothing but love," he says. "Music and art is my way of paying the bills and surviving. I haven't left the city as an adult because Detroit has been treating me well through all of the tribulations of maturing as a DIY artist. I've been noticing other cities and countries being more interested in what I do. Detroit is used to me being a genius, but the world isn't." —Kahn Santori Davison